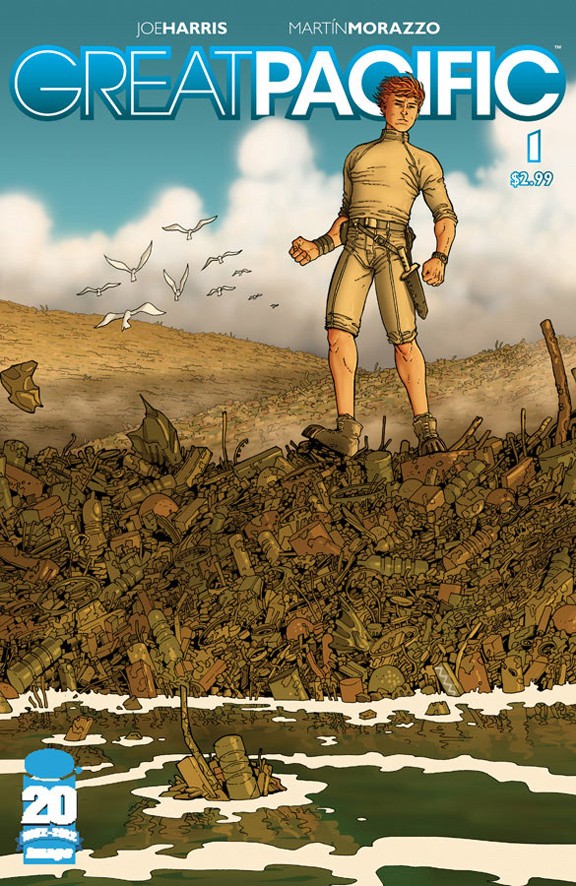 Great Pacific is a strange little comic coming out of Image this week. Of course, the house rules over at Image allow for almost entirely creator-driven storytelling, so it’s no surprise that writer Joe Harris and artist Martin Morazzo have been given the opportunity to tell their combination corporate-suspense-thriller/increase-Green-awareness comics yarn with this new Great Pacific mini-series. If that sounds like the type of genre you’d be into it, then Great Pacific is definitely worth a look. If it doesn’t, well, I think it’s worth a look anyway, if only because I don’t really know how many comics out there are using pollution, global warming, and floating plastic bottle islands in the Pacific as legitimate, central plot points.

The story joins disillusioned trust-fund debutante Chas Worthington III just as he sets into a motion a series of complicated corporate and political maneuvers to initiate his global/environmental revolution. How did his father and his father’s father make their billions? Multi-billion dollar gas corporations, of course! Hence, automatic character pathos. The thick debut issue clocks in at over 30 pages (for only $2.99!), and a lot of the expository and character pieces are put into place for what I am going to hope is a significantly more action-packed, suspenseful mini-series. There are a few kinetic moments in the script—including the initial lion hunt on the African Serengeti that starts the issue—but overall issue #1 reads a standard set-up book. Harris introduces all of the characters, all of the conflicts, and all of the potentialities over the course of the issue. The one card he holds is exposed by issue’s end, and the larger mystery is somewhat spoiled on the first page. While I appreciate knowing what the game is from the start, I do wonder what really would make me pick up issue #2 if there aren’t really any overwhelming questions left by #1’s end. Of course, the concept is just fascinating enough that I’ll probably tune in for next issue just to see where Harris is going with all of this.

While Morazzo’s linework is indeed crisp and detailed, it’s really his turn as colorist that drew me to picking up this book in the first place. His colors are rich and vibrant and perfectly suited to the global scope of Harris’ script. The initial pages on the Serengeti exude warmth through rich reds and oranges. If anything, Morazzo’s artwork might keep me tuning in for the next few issues even if the concepts dwindle away.

Worth a look. It’s a fascinating concept, and Harris and Morazzo put together a tight, clean, well-developed debut issue. While there isn’t anything substantially unexpected or novel about the actual action of the comic, the potentialities surrounding a story on global corporate politics and environmental issues hold some promise for the future. Check it out!

One thought on “Great Pacific #1 Review”