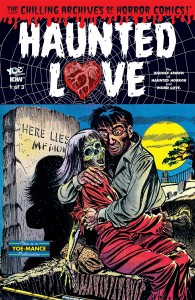 Haunted Love is a collection of horrifying romances. The team that produces Haunted Horror and Weird Love decided to combine the two into a three issue mini-series. It’s a macabre mash-up if you will.

The first issue of the mini-series holds seven tales all collected from forgotten, sensationalist comics of the early 1950s. The issue includes stories about misandristic witches, shape-shifting tigers, actresses escaping death, suicide pacts, marrying Death himself, and a murderous femme fatale. Actually, most of the stories feature a murderous femme fatale in some way. All the comics star women but there’s no development or personalities in them. Just blonde hair, clingy 50s cut dresses, high heels, full lips, and murdering men. All of which I can get behind but character development is still needed. The stories are all no longer than fifteen pages each, but if the only things being learned about your characters are stated point-blank during inner monologue exposition dumps, you need to go back and do some editing!

And although the series is being categorized as horror I couldn’t say I was even remotely startled. It’s not that I couldn’t have been scared by the topics presented (though I’ll be the first to admit that I’ve been desensitized to horror since about age eight) but they were all very formulaic and clichéd. It wasn’t hard to guess how each was going to end and that’s not scary. Good horror is supposed to leave you guessing for as long as possible. It’s supposed to disturb you when that twist is finally revealed. It’s supposed to distress you that you didn’t see it coming sooner. The only thing distressing in Haunted Love was the way women are (not so subtly) portrayed.

The art is the classic 1950s style. Limitations in the printing technology made a very prevailing style and everything throughout Haunted Love could have been drawn and inked by the same person. It’s simple and rough around the edges but also colourful and expressive. Those first two, fine for horror. The second two? Not so much. There are no shadows or murkiness, so there’s really no atmosphere created. I’m afraid that The Golden Age of Comics just doesn’t lend itself to horror.

The Verdict
Skip it. Unless you are a classic comic frantic there’s nothing really in here to keep your attention. The art is all very standard for the era with no standout mentions and the stories are dastardly, but more due to the misogynistic overtones than any of the supposed horror. It’s a sexist product of the time and jarring in modern times. Haunted Love collects stories from decades long forgotten. Forgotten should have remained the key word.