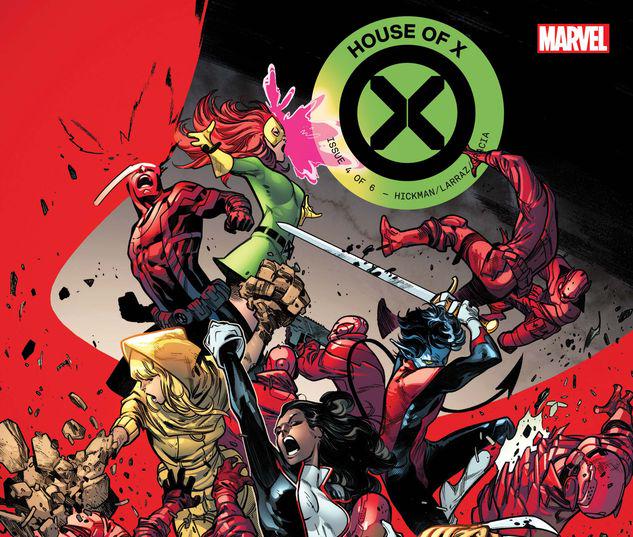 House of X #4 continues the perilous mission started last week in House of X #3. The Cyclops led mission is vital to the survival of the mutant race as the humans are in the process of bringing a Mother Mold on line, which would mean the creation of countless Sentinels to police and if needed decimate the mutant race. The X-Men Team, which includes Marvel Girl, Wolverine, Nightcrawler, M, Mystique, Archangel, and Husk, were hit with a suicide attack at the end of last issue and now must piece themselves back together or face the potential extinction of their race. Professor X, safely ensconced on the mutant island nation of Krakoa uses his and the Stepford Cuckoos telepathic abilities to connect with Jean Grey so they can follow along with the raid and prod the team into action if necessary. This is not the Professor X that readers have known and loved. This Professor X is a manipulative zealot willing to sacrifice his best and brightest for the cause and even to goad them into self-sacrifice if it fits his ‘plan’. I stated last week Professor X feels more like a cult leader than a revolutionary, and House of X #4 does little to change my mind.

To say that House of X #4 is shocking is not doing the issue justice. Although the team assembled is one of the more formidable in X-Men history, with several characters from the iconic original team and superstars from the Claremont era. Yet the team is not invincible and to be trapped on a space station in orbit around the sun with a desperate human crew leads to a mission going FUBAR from the get go. Yet Professor X’s will must be done, at any cost. By the end of the issue I was shocked, horrified, dumbfounded, full of questions, and cannot wait to see what comes next. The action in this issue was epic and somehow in such a dense issue each of these legendary characters gets their moment to shine. The humans though are not going to sit back and let the mutants destroy their Mother Mold without a fight and just like everything in this relaunch/reboot nothing is predictable and the human-machine alliance is as big of threat to the extinction of the mutants as they have ever been.

To amplify the threat posed to the mutants and to reinforce Hickman’s willingness to be unpredictable and incredibly cruel toward the mutant race he and designer Tom Muller have littered the end of book with text pieces and classic imagery from X-Events from the past where the extinction was almost complete. There are mentions of the Decimationfrom Wanda Maximoff’s simple line “No More Mutants”. There is imagery from the now classic New X-Men #115 during the classic Morrison and Quitely arc E is for Extinction. There’s also death tallies for the Mutant Hate groups that have formed throughout the entirety of the X-Men run. Clearly Hickman wouldn’t include this imagery and death tolls unless he had dark plans for Marvel’s mutants and after House of X #4 it is clear no one is safe and nothing is predictable.

Jonathan Hickman has turned in yet another amazing issue of these dual series that I cannot decide which one I like more. All I do know is that he has me completely engrossed in the lives of the X-Men once again and I can’t wait for the next issue to reach my hands. Pepe Larraz’s art is once again magnificent and he is having a field day with the inventive bio-technology of Krakoa as well as the technological achievement of the Mother Mold station. Larraz’s dynamic fight scenes were moving and superb. He perfectly conveyed the gravitas of the X-Men’s mission and along with Hickman’s words he had tears in my eyes by the end of the issue and it took me a moment to compose myself. I truly don’t know what will come next but I can’t wait to find out.

Verdict: House of X #4 is an emotional rollercoaster of an issue that continues the positive momentum of the Hickman relaunch of the X-Men and is a Buy!