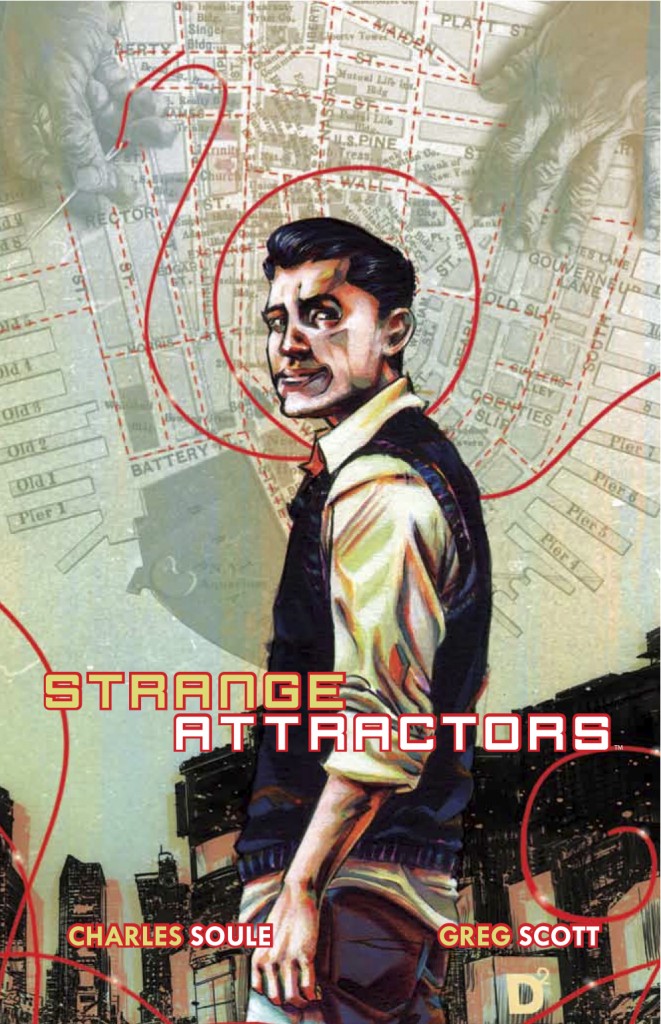 What if all those everyday occurrences that we chalk up to quirks of fate and/or random acts of kindness were actually carefully calculated “adjustments” designed to maintain order in what would otherwise be a chaotic, self-destructive system?

Here’s the synopsis from the Archaia page at comixology:

“In order to set himself up with a cushy job post graduation, Heller Wilson takes on a subject for his PhD thesis at the behest of his advisor. This leads him to meet with Dr. Spencer Brownfield, a disgraced Columbia professor who spent his career researching Complex Theory, the idea that one can use mathematics to predict the large-scale outcomes caused by minute changes in environment. At first, Dr. Brownfield seems crazy, but Heller soon discovers that the doctor’s research might be the only thing keeping New York City from destroying itself from the inside out.” (via http://www.comixology.com/Strange-Attractors/digital-comic/FEB130711)

Originally digitally published as a 5-issue mini-series between December 2012 and April 2013, Strange Attractors hit stands this week in the graphic novel format that Soule seems to have originally intended the comic to be in (at least as his website would suggest). Frankly, I couldn’t even begin to fathom how such a nuanced, layered story could be told in anything but this collected edition, especially considering the sheer number of interconnected sequences and moving plot parts—some of which seem to be nothing more than non-sequitur departures from Heller Wilsons primary travails. But, as is often the case with these Hickman-esque oeuvres, all of the pieces come together in some pretty remarkable ways.

I’ll leave the plot description to the synopsis above; needless to say, Soule balances the math with the action well in this comic, weaving discussion of theorems and equations with banter regarding music and bars. What could otherwise become another techno-babble-laden pseudo-science story is granted a great deal of heart and emotion through the characters’ (and Soule’s, as suggested by the spectacular forward to the book) admiration and commitment to the city of New York. Yes, Wilson and the Brownfield use their Complexity Math to accomplish some astounding feats, but that is really just the vehicle for Soule to write a “Save the City” story in a fresh and exciting manner. 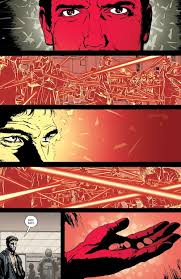 Complexity Math and marvelous characterization aside, a real success for Strange Attractors comes in the form of Greg Scott’s lines. A blend of Maleev’s grit, Epting’s atmosphere, and Lark’s scratchy sensibilities, Scott’s artwork leaps from wide-angle shots of Central Park and the Hudson River to claustrophobic close-ups on the worry lines of our protagonists. Strange Attractors mixes the counter-terrorism feel of Ex Machina, the noir characterization of Criminal, and the progression charts of your favorite statistic class, so Scott’s aesthetic stability helps maintain a consistent tone throughout all the changes in genre. Furthermore, Art Lyon and Matthew Petz do a stunning job with the colors, covering everything from the realism of a polluted Central Park reservoir to the surreal stark reds of chaos and calming blues washes of order.

In addition to Scott’s fantastic artwork, Robert Saywitz designs several “Complexity Maps” for the book. These maps capture the trends of chaos and order in New York as Heller and Doc Brownfield work tirelessly to save the city. Saywitz’ maps are intensely complex in and of themselves, a combination of shapes and swirls and images toeing the line between chaotic and methodical. They crop up periodically in the main story, but this graphic novel features back-up material in which Saywitz explains his logic and design process. Fascinating stuff.

Buy it. Strange Attractors is exactly the high-concept storytelling that is helping push creator-owned comics to the critical forefront in the industry. Soule’s decision to imbue his story with complex mathematical theory is balanced with the emotional resonance of the characters and their love for New York City. In a post-9/11 world where techno-terror is a leading genre in pop-culture, its refreshing to engage with a story in which the protagonists fight chaos through intelligence and determination rather than more violence. Scott’s artwork stuns and Soule’s characters hit all the right beats in this amazing graphic novel from Archaia! Check it!