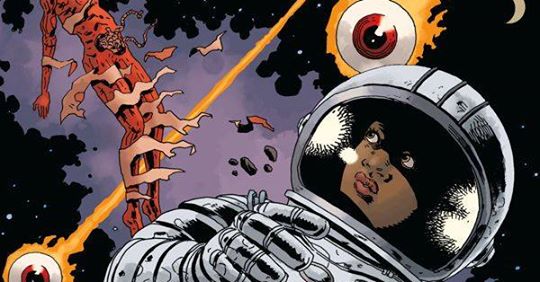 Secrets are finally revealed, questions are answered, and pacts are broken. Black Hammer: Age of Doom #5 is an issue that fans have been waiting for since the Black Hammer first premiered, an issue that finally explains what has been going on for our transplanted heroes. With the shocking final page from the last issue resonating in my mind it suddenly became clear that everything we thought we knew about the Farm and our heroes in exile has been a lie as the truth of their exile from Spiral City is finally explained. But to understand the reveal Lemire begins the issue with Lucy Weber, daughter of the late Black Hammer and her investigation into the ‘death’ of Spiral City’s heroes in their defeat of the Anti-God. Her investigation eventually leads her to Doctor Star, semi-retired super hero and all around brilliant astrophysicist who points her in the direction of the Para Zone, source of both Doctor Star and Colonel Weird’s powers, as well as one part of the answer to what has really been going on.

Longtime readers of Black Hammer have been waiting for this reveal since the first volume hit the stands. That being said I wasn’t sure if I was ready to move forward, to discover how the cosmic balance of the universe was thrown off with the defeat of Anti-God and the universal force of destruction would return if Spiral City’s heroes ever reemerged in their reality. Leave it to Colonel Weird, a paradox of a man whose life does not progress in chronological order, and villain turned ally Madame Dragonfly to weave a spell within the Para Zone to isolate our heroes from reality as well as to give them a chance at a normal life. What do the heroes do now that they know the truth and can’t return to Spiral City and their lives or that the spell cannot be revived? This is no doubt where Jeff Lemire and Dean Orstrom plan on taking us faithful readers next.

I fell in love with Black Hammer as soon as I read the first issue. With it’s Golden and Silver Age nostalgia, a nice level of creepiness, and a healthy dose of mystery was enough to keep me invested and anticipating each new issue (as well as the ancillary mini-series). I love Jeff Lemire comics but he is at his best when he is doing his creator owned work and I count Black Hammer and now Black Hammer: Age of Doom amongst his best. Along with Dean Orstrom, whose quirky art is perfect for this book and the wonderfully atmospheric colors of the great Dave Stewart, Jeff Lemire is crafting one of the best independent super hero titles of recent history. Even though a lot of questions were answered with Black Hammer: Age of Doom #5 there are just as many new questions abound and I can’t wait to see how the group dynamic shifts now that the heroes of Black Hammer are divided over the lie and broken now that they can’t go home (or in Abraham Slams case return to the farm). I have faith in this creator team to expand this story and I’ll faithfully be waiting for the next issue.

Verdict: Although questions are answered within Black Hammer: Age of Doom #5 even more questions remain and that is the beauty of the book. Jeff Lemire is at his best on Black Hammer and the combined art and color work of Dean Orstrom and Dave Stewart make this book a Buy every month.