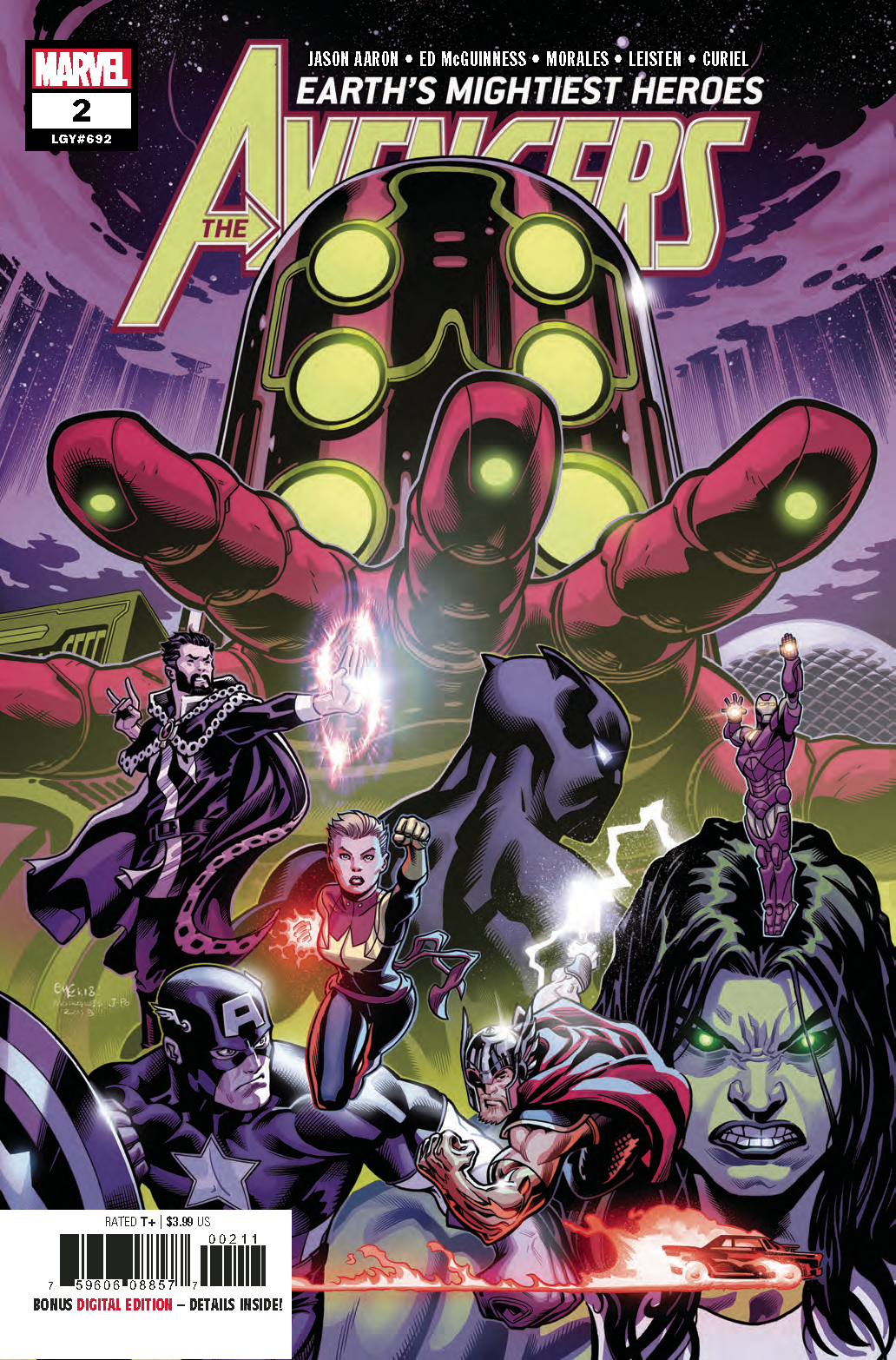 Celestials are falling from the sky, killer man-sized bugs are emerging from the ground, and the Final Host has arrived to destroy the earth. Thus begins the Avengers #2, Jason Aaron and Ed McGuinness’ relaunch of Marvel’s Mightiest franchise. While the first issue was a slow burn, building to the moment that the Celestials began to plummet and the assembled heroes charged once again into the breach to defend their world this issue is anything but slow and the threat is ever present and world shattering.

The Avengers #2 was another solid issue, which wasn’t unexpected with Jason Aaron at the helm. Where the Avengers #1 moved around every few pages to set up not only the oncoming threat of the Final Host but also to establish the principal players in this new incarnation of the Avengers this issue focus more on the Big Three and Captain Marvel as they deal with the threat from the skies while Ghost Rider and She-Hulk have a bit of the super heroic misunderstanding before realizing that they may need one another to fend off the man-sized bugs that apparently want to kill them. Aaron also uses a mystery narrator (it’s not hard to figure out who it is if you know you’re Avengers history) who seems to be the impetuous for the Final Host’s arrival on earth. The book concludes with a great cliffhanger and no doubt next issue will accelerate the action and also hopefully bring Black Panther and Doctor Strange more into the fold.

I’ve been excited of Jason Aaron’s run on the Avengers since it was announced several months ago and thankfully he’s living up to the hype. He has paced this issue perfectly and didn’t clutter it with to many characters, knowing that he has time to weave the entire team into the story. Although I’m not a big Ed McGuinness fan his artwork here is solid and although I think his superheroes look clunky I do like his depictions of the Celestials and the Final Host. I’m excited to see where this story goes and it is nice to see the Avengers dealing with world shattering events once again.

Verdict:You can’t do much better than Jason Aaron in comics today and the Avengers #2 is another example of why he is a modern master. The Avengers #2 has an engaging story and has perfect pacing and is not overly cluttered like many team books become in their early issues. Any fan of the Avengers has to be overjoyed with this issue and relaunch as a whole.