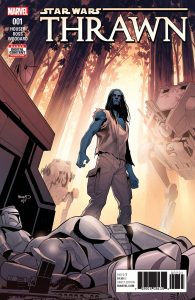 Star Wars: Thrawn #1 is based on the novel by Timothy Zahn. He’s been writing the character for quite some time, but now Jody Houser is taking the helm for this new comic series. She takes us to the beginning of Thrawn being part of the Empire. When he first arrives, he has long hair, which is not how we’re used to seeing him. He’s also not fluent in Basic, but is a fast learner.

Houser wastes no time with diving to deep into Thrawn’s background. We get quick tidbits throughout the issue about him being exiled, speaking Sy Bisti, and the fact that he knew Anakin. Otherwise, the story moves along quickly and he joins the Empire.

The art by Luke Ross with colors by Nolan Woodard fit well with this story and style. The first few pages stick to a nine-panel grid and it works well with how quickly things are moving in those first few pages. Thrawn makes his presence known and Captain Parck doesn’t hesitate to deliver him to Palpatine. The art also shows off Thrawn’s features well. His red eyes stand out against his blue skin tone.

This issue is a good start to a new series on Thrawn. I have yet to read the recent novel by Timothy Zahn, but it’ll be interesting to see how the two compare. He’s an interesting character who deserves a deeper dive into his history and it looks like this comic will give us that.

Verdict: Buy. If you aren’t 100% familiar with Thrawn’s origins in the Empire, this is a great place to start. Jody Houser wastes no time telling his story and there’s more to look forward to with the coming issues. I certainly plan to continue following along with this one.