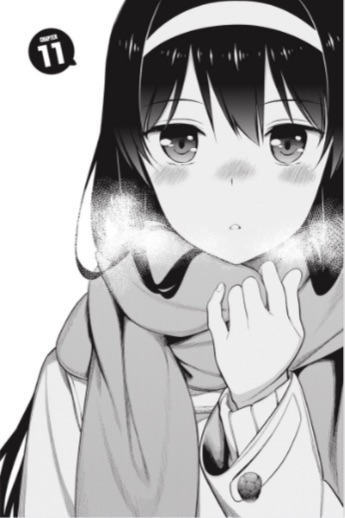 How to Raise a Boring Girlfriend volume 3 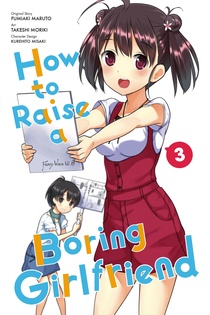 We return to the world of doujinshi in the latest installment of How to Raise a Boring Girlfriend. Tomoya is determined to work with his team of talented ladies to create the ultimate gal game for the winter Comic Market. Utaha writes the story, Eriri draws the art, and Katou remains the “normal” girl inspiration. Tomoya provides the overall vision for the project, seeing as he is more or less an aficionado of gal games.

The relationship between Tomoya and the girls builds in this volume, especially with the addition of a few new characters. Izumi, a kouhai of Tomoya’s, shows up without notice. She possesses great talent – talent that threatens Eriri’s confidence. Izumi’s older brother, Iori, represents a circle of creators that headhunt talent. Members of the circle often fast-track to mangka stardom, and Iori has his sights set on Eriri.

The actions the characters take reflect their motivations. Tomoya approaches Utaha about establishing a normal, everyday romance as one that trumps a romance decreed by destiny. This is a tie to his fascination with Katou, a completely ordinary girl. Eriri is driven to prove those around her that she has talent and is capable of greatness, even if that means taking a harder route to reach her goal.

With one male protagonist and three main female protagonists, How to Raise a Boring Girlfriend could easily become a harem story. This is not necessarily the case for the series. Sure, each girl has somewhat of an interest in Tomoya, but they never truly act on it or undercut each other. In fact, Utaha seems fine with casual flirting with Tomoya, Katou remains oblivious, and Eriri only desires to return to the state of friendship she and Tomoya had as children.

A fun element of this series is the presence of a meta story. The characters often react as if they were writing the story How to Raise a Boring Girlfriend themselves. For instance, Katou shows up at school one day with her bob in a ponytail. The girls argue that her character is already established as one with a bob, and Katou wonders if they are referring to her as a character in the game or her as a person in their lives. When the team gets into a personal dilemma, Utaha suggests that they follow the “win the childhood friend” storyline, and she stays up all night with Tomoya and Katou plotting out the narrative.

The art of How to Raise a Boring Girlfriend can be fanservice-y at times, but the focus is pretty minimal when compared to other stories with a male protagonist and a number of female friends. Even when the fanservice moments are presented, they usually illicit a reaction from Tomoya. When Utaha talks to him while wearing a robe, he accidentally focuses on her chest. His immediate reaction is to blush and become intimidated. His internal monologue that accompanies this flub is downplayed as well, indicating more of a young man’s nervousness when faced with something a little more adult than he is.

While How to Raise a Boring Girlfriend is not my favorite current manga series being published, it is one that I still make time to read it when it is released. What fascinates me personally about the story is the concentration on fandom and interactions between fans. The end goal is to present a game at a comic convention to other fans, and that aspect of the series has me hooked. How to Raise a Boring Girlfriend is a manga that nicely compliments Monthly Girls’ Nozaki-kun, which is a series about creating shojo manga. If you are interested in the doujinshi culture, it’s a buy. If not, it’s a borrow to see if it is a series you want to keep up with.

How to Raise a Boring Girlfriend is published by Yen Press and can be purchased electronically or in paper format. Thanks to Yen Press for providing a review copy for this article.