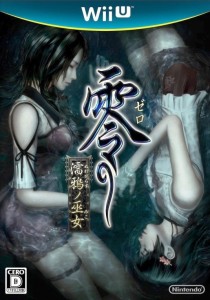 Fatal Frame 5: Maiden of Black Water has been available to North America as a Nintendo eShop game for about fifteen weeks, which makes this less of a retrospective on the game and more of a really harsh review as I compare it to the Fatal Frame games of the past. So let’s get this over with because I am fresh off of playing this and I am not in my happy place. Done are the days of snappy introductions. I’m done. I’ve been done since about part way through my critical play through of The Tormented. So let’s just get this shit show on the road.

Mount Hikami. Currently a popular suicide spot. Formerly the site of a drowning ritual. Among other rituals. Probably all equally as horrible. Why else would there be ghosts everywhere? You wander the forest surrounding the mountain as an author (?) and a paranormal investigator (?) that also runs an antique shop (??). Oh, and a teenage girl who is on showcase in a wet, white top. Because why not?! She’s also apparently the shadowy offspring of an incestuous union between Miku (yup, the same Miku from both the first and third games) and her dead brother Mafuyu.

Interested? Because I’m not. Listen, I’m not going to lie, I was only half into this game the whole time I played it. I was either scrolling through Tumblr, annoying my cat, or playing a little Happy Home Designer on the side while Maiden of Black Water dredged on. To my credit as a usually rapt videogamer, I did try to get into it! The universe was just against this from the start. Is that my anti-Nintendo bias showing again? Oh well, it is what it is. And it’s a videogame that hopes its gimmicks make you stay, not its story.

Unlike the PS2 trilogy, the two Nintendo entries haven’t given you back story before launching you into the game. Maiden of Black Water has no cutscene to give you even a vague impression of what the story is, unlike games one through three. Instead it opens with a text dump which I guess gives you what you need to know but my eyes are terrible and I couldn’t be bothered to squint to read the screen. A terrifying start, right? Then there’s a brief cutscene that shows tits. It also gives you a quick rundown of the controls, but mostly it’s tits because everyone is wearing white and everyone is soaking wet. So given that this is how the story starts, there’s nothing that grabbed me and made me curious as to what was going to happen next. It could have been a great story too since we’re back to ritualistic murder that goes wrong because of a central love story. If there’s one thing this series excels at, it’s screwing up sacrifices and making your heart bleed for young love. The problem with this storyline is not the content but the way it’s presented and I’ll prove it with the three biggies of videogame design: characters, themes, and technical presentation.

I have a love/hate relationship with Fatal Frame’s characters. As far as Miu, Yuri, and Ren go they’re not terrible. They’re not on Mio’s (Crimson Butterfly) level, but they could be worse. We once again have the storyline spread out over multiple characters, which lessens what you’re able to learn about any of them, which severs any intimacy you might have had. What worked so well in the first two games is that you really got to know your character: to empathize with them. That’s something the newer games have not been able to get right. They feel disjointed from the things that happen, like they’re in the story as objects, not living people; they’re just passing the story along instead of interacting with it. The main contributor to this feeling is that a lot of their dialogue is really clunky and unnatural. They’re here to fill in exposition: just dump it on you all at once instead of you slowly piecing it together over the course of the game. The opening chapter is particularly rough. It’s an oral instruction booklet on how to use the Camera Obscura and, as a veteran of the series, it’s painful to listen to. Like, I know that the camera lets you see ghosts, get on with it! And put on some functional clothes, your shirt is being held together with ribbons and you might as well be bottomless given how itty bitty your shorts are! I know, I know, I got into this in my last retrospective so I won’t go into any great detail here besides to say that the North American release had the alternate costumes toned down but the Japanese release did not. And that it’s still grossly unnecessary.

In previous games the story came to you over the course of the whole game through cutscenes and brief book entries. You had to build up your own knowledge of the events and if you didn’t bother to look, you missed large chunks of the story. Nowadays if it isn’t spelled out in plain language within the first few chapters of the game it’s poured out all at once with huge chunks of text. Leave it to Nintendo to turn everything into a block of text you have to tediously wade through.

Changing that structure of how you get the information has ruined the tension that used to be so skillfully crafted. Maiden of Black Water’s scares feel diminished because of this. The Mask of the Lunar Eclipse felt the same way. Compared to the first three games, which felt masterful in their construction of suspense and tension, Nintendo’s two games come off as cheap thrills delivered as jump scares. The story is too shallow to build any enduring, overarching themes on, which is a huge shame because, as I said before, everything that has made Fatal Frame great in the past is still here! Love and loss and regret and pain: god it makes me weak in the knees thinking about how satisfying stories built on these themes can be! But not here. Not in Maiden of Black Water. The solid base of the first three games is just being dispersed and moved around until it’s unrecognizable. Especially the back stories you’ll see concerning the ghosts, which I think are supposed to be shocking but just come off as clichéd and lazy too much of the time. They’ll be no empathizing with your enemy this time around, ESPECIALLY with a white haired little girl ghost that you find in a house full of dolls. She’s sassy. A sassy ghost… in my horror survival game… I just don’t think so! Excuse me while I block the little brat forcefully from my memory!

As far as technical presentation goes it’s standard fare in regards of the Nintendo Fatal Frame games. It’s the prettiest game so far and surprisingly has plenty of colour, unlike Mask of the Lunar Eclipse. The motif throughout is water and hair. What is it with Japanese horror and hair? And there’s finally a run button! Holy crap it only took them five games to put on in! I’ve never had a huge problem with the speed at which the characters move, but it’s nice to have the option to dash away. Thankfully I didn’t have to play this game with a Wii remote and nunchuck (cursed motion controls!) but I didn’t really enjoy using the WiiU gamepad either. For one, the characters are fiddly little shits that are frustrating to control in the tight corridors of haunted houses and twisting footpaths of the mountain forest. Two, it’s kind of nauseating to look between your gamepad (which acts like you’re looking through an actual camera) and your television. The novelty of swinging the gamepad around wears off somewhere near the end of the game when your arms start giving out and you wish you could just lay down under a blanket like you could with a proper gaming system!

Think of Maiden of Black Water like plastic surgery commissioned on a vague notion of what the kids like nowadays and not with any real thought or care to what will improve upon what you’ve already got. That’s the philosophy behind the current Fatal Frame games. Moving through this game doesn’t feel like progress. It feels more like slogging through knee deep water (which is actually something you’ll do fairly often in game). Game five is not a downgrade to four like three was a downgrade from two, but it’s not really an upgrade either. It’s just that the technology it’s presented on has changed once again and it seems like the developers just can’t get a handle on how the franchise should flow.

The frustration to story scale for Fatal Frame 5: Maiden of Black Water is way heavy on the frustration. I hold in my heart a lot of prejudice towards Nintendo and a lot of love for Crimson Butterfly. Every game after Crimson Butterfly I’ve regarded in how it compares to that first ever Fatal Frame that I rented way back when as a teenager. None have ever held up. Of course, it’s all opinion, isn’t it? Maybe my frustrations come from being unable to adapt to a changing game franchise. Or maybe my frustrations come from Nintendo taking a big, motion controlled shit on the subtle ghost stories I loved being a part of. I suppose with Maiden of Black Water still being a new release, only time will tell.

How many pictures have we taken to get to this point? How many spirits exorcized? We’ve had to make sacrifices and tough decisions. Uncountable herbal medicines have been found and used, albums filled and re-filled with photos of enemies vanquished. We’ve loved, we’ve lost, we’ve shipped Yae and Itsuki… okay, maybe that last one’s still just me, but the first two we have all definitely been through! Fatal Frame has had some short comings since changing hands (cough cough Nintendo should stick to Boos cough cough) but it’s still offering something unique in a world of zombies, cancelled Silent Hills, jump scare PC franchises, and ever declining Resident Evils, and that’s story. A story of sacrifice in Fatal Frame. A story of fate in Crimson Butterfly. A story of letting go and moving on in The Tormented. A story of the price of memories in Mask of the Lunar Eclipse. A story of choices and their consequences in Maiden of Black Water. Plus ghosts!

And who doesn’t love a good ghost story? 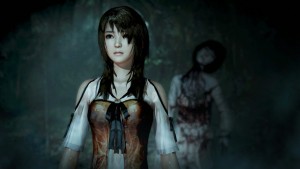