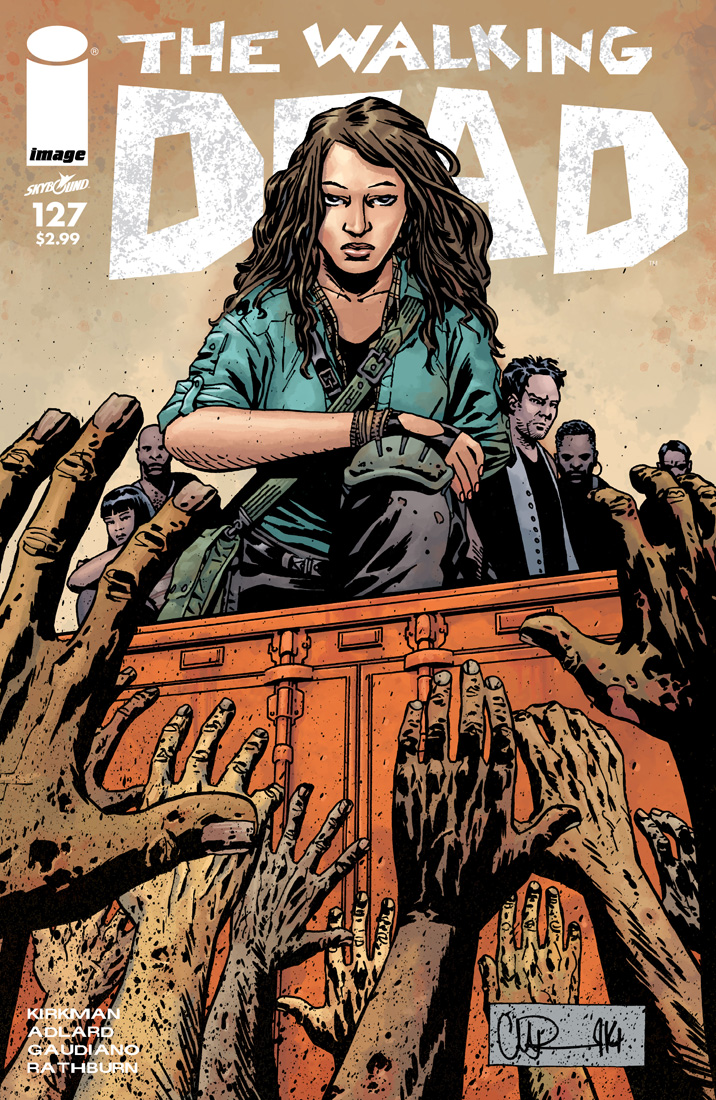 A proper review of The Walking Dead #127 must begin with a reiteration of two key points:

1)    The Walking Dead as a series has been running for over ten years. Robert Kirkman has written every issue and Charlie Adlard has illustrated nearly every issue (particulary those after #7).

2)    The “ALL OUT WAR” storyline that began late last year in issue #115 ended just a few weeks ago after raging on for a dozen issues. In the story, Rick Grimes led the combined forces of multiple communities of survivors (Alexandria, the Hilltop, and the Kingdom) against the sinister Negan (who makes the Governor look like a kitty cat on a litter box) and his Saviors. Blood and hilarity ensued.

A lot of people—non-believers mostly—often criticize The Walking Dead for “spinning its wheels.” Storylines drag on and on and there are long stretches where, aside from the occasional walker-on-the-fence attack, nothing really happens. Furthermore, people often question just how long The Walking Dead can actually go. Now that we’ve pretty firmly established that the mystery of “how” the zombie apocalypse will never truly be solved, how long can we simply run the “Let’s try to survive and stay civilized in this new world” plot over and over again???

Well, in the aftermath of ALL OUT WAR, The Walking Dead #127 spits in the face of all those criticisms.

In The Walking Dead #127, Rick and Carl and all of our zombie-fighting friends have, essentially, rebuilt civilization. Yay!

Seriously, they have. Kirkman and Company make the fascinating choice to time-jump ahead two whole years to a new status quo in which the Safe Zone is now a vibrant community with gardens and buildings and schedules and apprenticeships.

Things are so good that one of the primary conflicts of this issue is whether the new lodging will be up in time for a “Fair” that will bring the Hilltop residents to Alexandria for a celebration! Yay! This issue is less about high-stakes survival mode and more about community. I can’t stress that difference enough; this issue reads features less gritty, darkest-hour despair and more pastoral idealism. It’s a strange tone, but a welcome shift to a book that has done a lot of the same man vs. zombie/man vs. man storytelling over the last ten years.

The issue opens with a new group of survivors (yes, more new new new) led by Magna. Her similarities to Rick are probably not unintentional—fearless, reluctant leader dedicated to the survival of those close to her—as it seems as though Kirkman may be introducing a new reader-corollary now that Rick is the grizzled, bearded leader of a new utopia. From there, we get caught up with all/most of our favorite characters. I won’t include much in the way of spoilers here, but the new relationships and connections that Kirkman plays with now that we’re “Two Years Later” are wonderful. One particular character is missing from the proceedings, and it will be interesting to see how (if) this character shows up down the line…

Buy. It’s also a great jumping on point for new readers! The Walking Dead #127 is a phenomenal issue that finally takes the bold step to redirect and redefine the status quo of the series. While we’ve relied on shocking deaths and gory massacres in the past to change things up, the simple choice to jump the series ahead two years has produced more enthralling new situations than anything before. I’m excited to continue reading The Walking Dead again, and it’s because of this issue! CHECK IT!