Earlier this year, 44FLOOD blew Kickstarter out of the sky with their TOME project, which sped past the set goal of $18,400 in less than a week and closed at an astonishing total of $132, 538. It was their first project as a content publishing group and they thanked contributors by continuously upping the rewards packages, adding both new tiers of rewards to bid on and adding extras to the rewards that already existed. The project was a huge success and put the name 44FLOOD on the comics map as artists to keep an eye, and your wallet, on.

They have done it again with their latest Kickstarter, a much smaller project, but no less rapidly exceeding goal expectations. LUST is a prose, comic and art book that brings together three of the most passionate, driven and talented comic book creators out there today in a wonderfully ambitious collaboration. Ben Templesmith, Menton3 and Steve Niles together make a powerhouse trio of artists who have all established themselves as pros in the comic book world, especially in the horror genre. Together, there can be nowhere to go but up. So far up we will all need to take cover. Shit is going to explode. 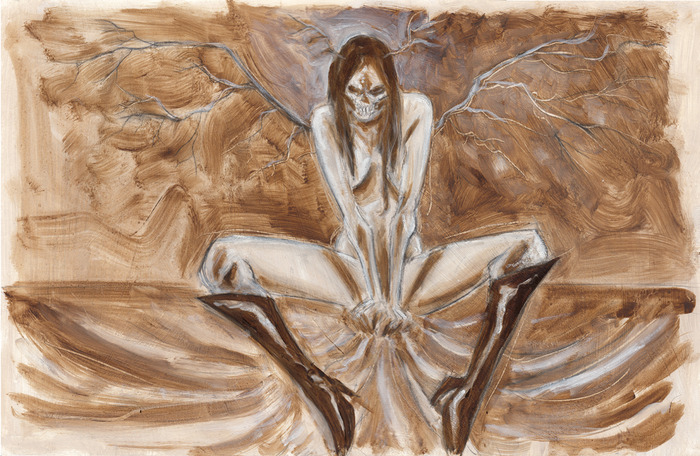 There are 11 days left to get in on this Kickstarter and claim some of the one-of-a-kind rewards being offered. 44FLOOD have already blown past the goal of $4,400 in the first day, but don’t let that deter you from contributing to this. They are again throwing more and more rewards in to the bag, constantly giving back for every new donation that they receive. These are 3 of the most genuinely committed creators you will meet in the comics industry and they prove it by working hard to show their appreciation for the support they get. Some of the awesome rewards up for grabs include limited edition prints, signed, limited copies of the book, original sketches and paintings, custom worked covers for your own art/comic project and even the opportunity for some professional assistance on your own project from horror word wizard Steve Niles himself.