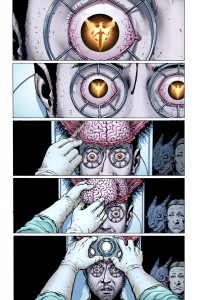 Marvel NOW!, the upcoming Marvel Comics’ relaunch continues to inch its way closer and closer. As it comes closer and closer Marvel is beginning to shed more light on some of the upcoming new books. Many of the books seem to be quite promising, with interesting combinations of writers and artists for announced books. The book that starts off the relaunch, giving off a similar vibe as last years DC New 52 flagship title “Justice League”, is the “Uncanny Avengers” book by Rick Remender and John Cassaday. A couple pages of Cassaday’s colored interior art for “Uncanny Avengers” were released on the Diamond Retailer’s website. 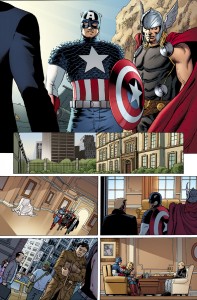 During one of Marvel’s “Next Big Thing” press calls last week Remender spoke about the book a bit. “Cap is actively trying to do something to mend the fences and to build a bridge between the mutant community and the Avengers. And then, of course, things don’t go as planned, and the Red Skull makes everything very terrible for everybody. Chaos ensues, and by the end of the chaos we start to see a good reason or two why this team should exist and why they do exist.”

Tom Breevort was also involved in the press call and had a few things to say about the team’s roster going in to the book. “The six characters we’ve shown on that cover and talked about up till now are not the only characters that will be in the Uncanny Avengers book and on that team. There are two or three characters who will be showing up as we get into later issues who are pretty crucial to the crew and where they go and what they do, but whom we’re not quite ready to reveal just yet.”

“Uncanny Avengers” is shaping up to be a more and more interesting book (not to mention gorgeous) as more information continues to come out on it. Be sure to keep an eye on it as November draws closer.