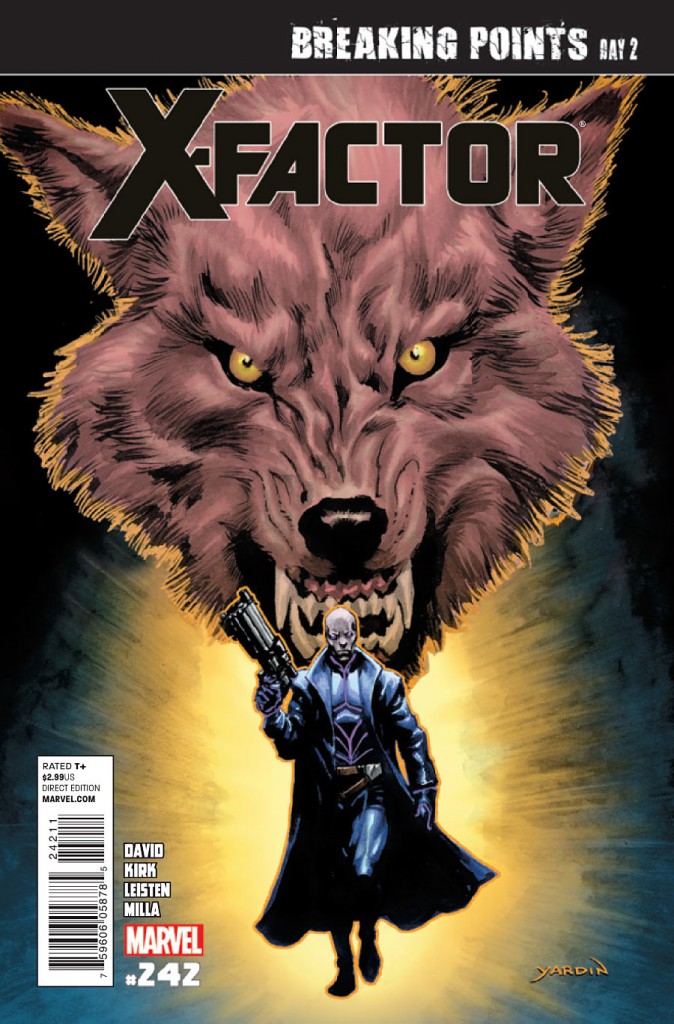 When I opened up X-Factor #242 to the recap page and saw that Strong Guy’s floating head had a giant red X through it, I knew that this whole “Breaking Points: Five Days that will change X-Factor Forever” storyline was for real. While Peter David doesn’t get to this issue’s “Breaking Point” through action-packed superheroics like Day 1, he does imbue Day 2 with more character development and drama than most mainstream comics (and a certain MUniverse Shattering crossover) have in an entire story arc.

Issue #242 sees the return of Darwin after his dismal departure from the series back in issue #215. Let me say that again: Darwin has been out of the X-Factor series for almost 30 issues. That’s over 2 years IRL. Peter David: Master of Continuity. From the first panel, David clearly presents Darwin as a much more serious, much more violent character than when we last saw him. And last we saw him, things were tough: Darwin had drawn in the essence of Hela and he had seen a vision of Rahne Sinclair’s soon-to-be-born son as a rowdy, world-destroying demonic entity. Based on those developments way back when, it’s no wonder that the Darwin we see in this week’s issue is a no-nonsense, leather duster wearing, gun-toting B.A. talking about voices in his head that tell him to hunt down Rahne Sinclair’s now-born, now-prepubescent son! In other words, Darwin’s development into a dastardly, daring, demon-hunting anti-hero makes perfect sense considering where David left him all those issues ago.

Vanora and Damian Tryp have a foreboding exchange, Jack “Werewolf of the Night” Russell acts as guardian to Rahne’s son, and Rahne, Rictor, and Shatterstar show up just in time to rescue the young were-pup. Given the developments with Rahne Sinclair back in issue #237 with Reverend John Maddox, it’s no wonder that (SPOILERS!) Rahne opts to leave the team in order to be with her son. Again, no superheroic energy blasts necessary on Day 2, just sensible, forward character development. Master class.

Leonard Kirk needs to draw X-Factor more often. When the series first started way back when, Peter David’s scripts were quasi-noir detective stories. Gritty, gloomy noiresque art was appropriate. Now that the series traverses the genres of superheroes, magical realms, time-travel, werewolves, and, of course, detective stories, a new style of pencils is necessary. Kirk’s artwork is kinetic enough for the four-color firefights and fiascos, but it also is clean and crisp enough to capture the nuanced emotions of the tighter scenes. David writes both so deftly that he needs an artist than can keep up. Kirk is up to the task, and Jay Leisten’s inks and Matt Milla’s colors just push things to the next level. Fantastic team.

For the 90 billionth time, read this series. Buy #242 and buy #241. Read through “Breaking Points,” and then keep pulling the book through the Marvel NOW era. It’s funny, it’s heavy, it’s dark, it’s light, it’s what we deserve and what we need. And don’t let my comments about years-long continuity push you away; David has this uncanny ability to make the story accessible from any panel on any page in any issue. Do it.