There have been a lot of questions brought up since The New 52 started, but probably the one I hear most often is “Whatever happened to The Joker?”After the events of Detective Comics #1, in which Dollmaker cuts off his face and helps him escape, nobody has heard or seen anything from him since. It seems that the wait is finally over now as Scott Snyder and Greg Capullo aim to not only bring The Joker back, but also deliver one of the biggest Batman storylines of all time in an arc they’re calling “Death of the Family.”

When asked, Snyder had this to say to The Source:

“Joker is my favorite villain of all time. Not just in comics. In everything – film, books, TV. He’s the greatest, hands down. So this story is something extremely important and personal to me – something I’ve been building in my head ever since I started working in Gotham. Basically, this is my big exploration of the Joker, my “Arkham Asylum” or “The Killing Joke”, only bigger in scope. Bottom line: it’s the biggest, baddest, most shocking Joker story I could tell. This is Joker completely unleashed. He has been away for a full year planning this revenge, watching, plotting, setting things up. And now he’s back. He has his traps set, his knives sharpened… And wait ’til you see him. Greg’s sketches literally gave me chills. Point blank: This is Joker like you’ve never seen him before. He has a mission. He has a secret. And he has a serious axe to grind with Batman. It isn’t going to be pretty, but it’s going to be a wild ride. Thanks for taking it with us.”

Capullo also had this to add:

“When Scott told me that he’d written a Joker story for our next arc, I couldn’t contain my excitement,” added Capullo. “Talk about a dream come true! For me, the Joker is the ultimate rogue and the villain I most wanted to draw. I gotta tell you, after hearing what the story is about, this isn’t a dream come true. It’s a nightmare! A macabre and bloody, flesh crawling nightmare. We hope you’ll have the nerve to face what’s coming. Warning: It ain’t for the faint of heart!”

“Death of the Family” starts in October with issue #13 but to hold you over until then, here is some promotional art from Capullo to get you excited: 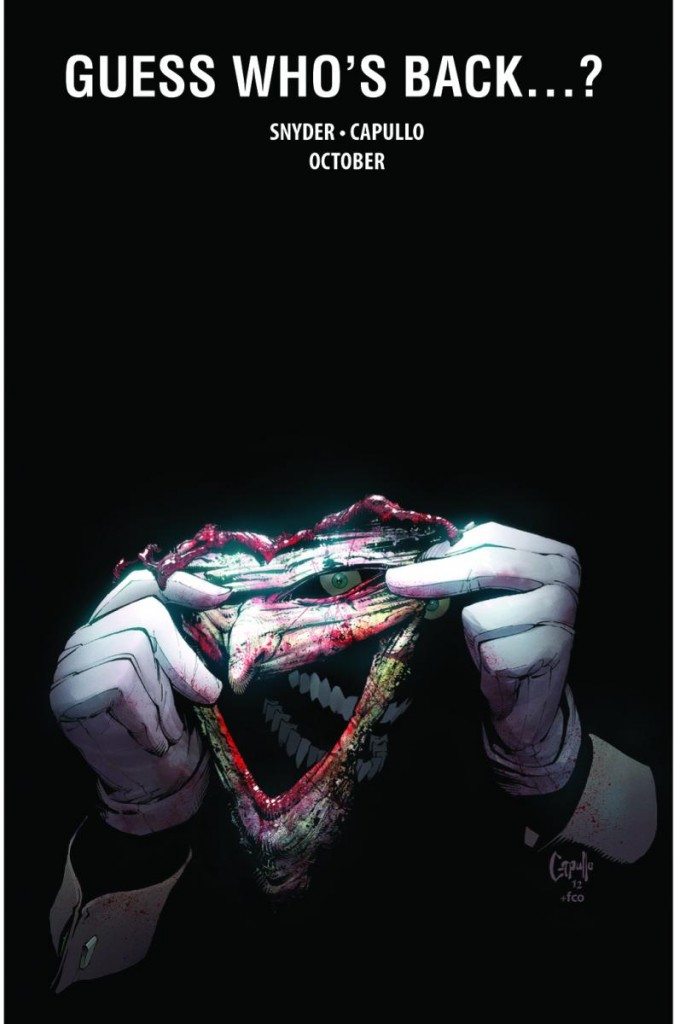