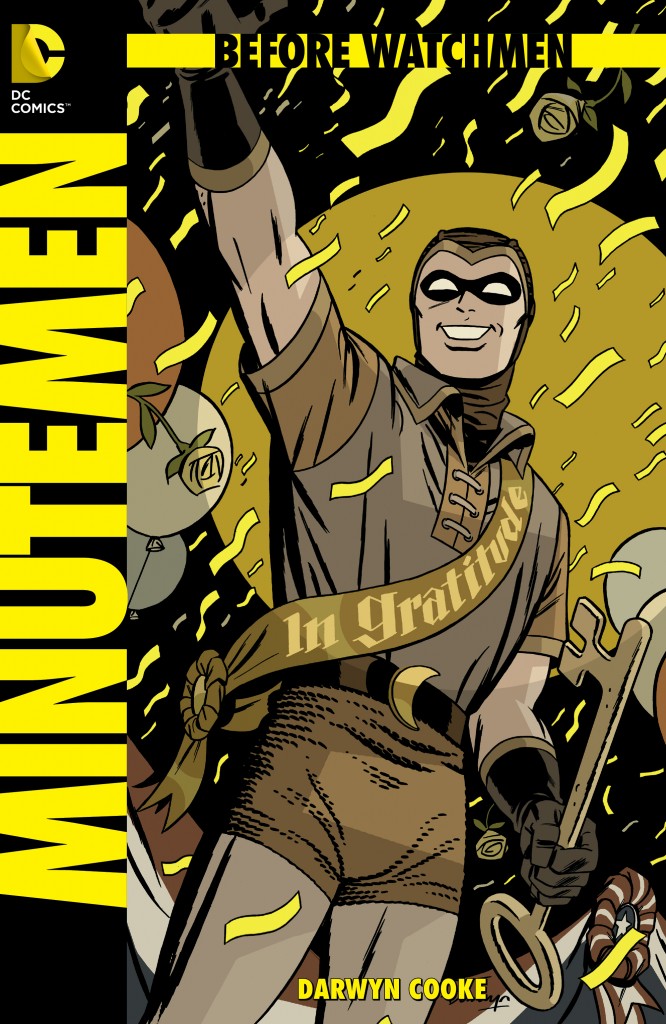 There has been a lot of kerfuffle in the months since the announcement of Before Watchmen. There were cries of foul play over the supposed slight to original Watchmen writer Alan Moore, a litany of hate towards DC and, surprisingly, a serious discussion about creators rights. The one thing this consternation has never been about though is the actual work being done or the writers and artists working hard to bring these iconic characters back to life. I love Moore as much as the next self respecting nerd, but I felt it was disrespectful to the people writing these books to write them off without reading a word. Well, finally we can lay aside the abstract criticisms and philosophical arguments and take a hard look at what Before Watchmen actually is.

The first of the books to hit stands is Minutemen #1, which explores the team up of the first masked adventurers. There is a lot of meta baggage thrown on the back of this release, but if you look beyond the Alan Moore comparisons, what you will see is a damn solid comic book that not only retains the spirit of Watchmen, but could be the a basis for a high quality mini series in its own right. The man taking this first leap into the fray is writer/artist Darwyn Cooke who, while not breaking new ground, gives us a lot to like in this inaugural issue. The story of the proto-heroes, only seen in flashbacks in Watchmen, has been the most alluring to me since the announcement of the project, add to that Cooke being a creator I greatly admire, and you get a nice stew of high expectations. Minutemen #1 delivers on a lot of those, while executing on something I didn’t expect, it’s a really effective number one issue.

I figured that Cooke would jump straight into the middle of the fray and just assume we as Watchmen fans would know the deal. But, refreshingly, he seems to have no interest in simply riding Alan Moore’s coat tails into the sunset. Instead, Minutemen sets out believing you know nothing about Captain Metropolis, Night Owl and the like and gives introductions to each of them in a brisk, but effective way. The best of these is the vignette about The Silhouette who, with her tragic tale of woe, could end up being the stand out character of this entire deal.

A lack of freshness is the only detraction that can be laid against this effort and that’s because Cooke is retreading ground covered in the original graphic novel, even using the same Under the Hood framing device, to ensure his readers are on solid ground with this cast of characters. This can worrisome for devoted fans of the original work, but keep in mind that while this train seems to be  leaving from the same station as it’s predecessor that does not necessarily mean it will have the same destination. Where this narrative ends up is all up to the creative team behind it and in this writer and artist’s hands there is a lot of reasons to be excited about where this locomotive is headed.

Buy It – Darwyn Cooke knows how to draw and write period pieces with familiar heroes (see the excellent Justice League: New Frontier)  and he does not disappoint here. This first issue is hurt slightly by the fact that it must cover familiar ground to introduce you to it’s players, but I can’t see that being an ongoing problem. For anyone out there worried that this wouldn’t feel like Watchmen, Mr. Cooke does a fine job retaining the brutality and rawness of Moore’s work while still putting his own stamp on it. I don’t know what the rest of the series will bring but I think Minutemen could be a definite winner.