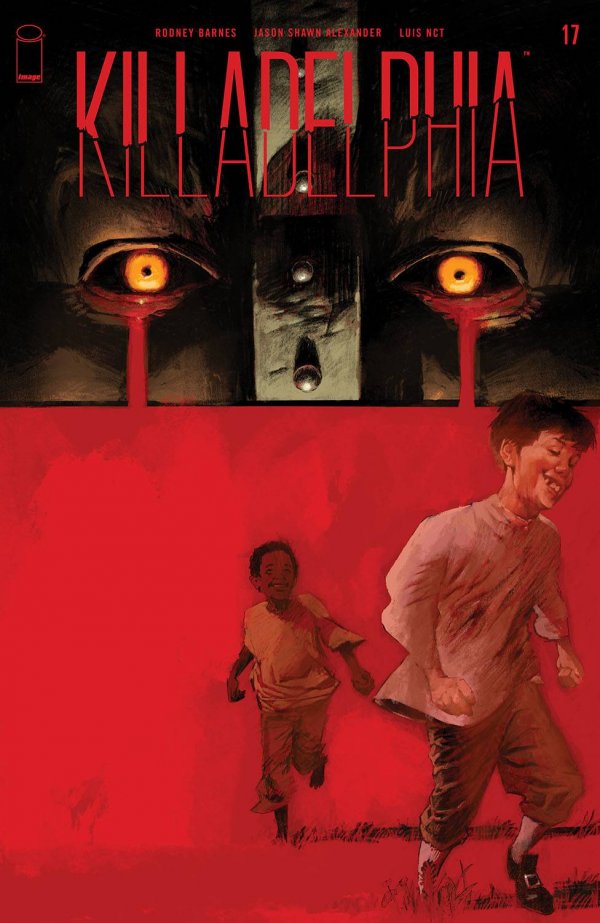 In this issue, Seesaw revisits an old friend and former minion of Abigail to ask her permission to take some of her blood. He tells Brianna that the blood is to aid a friend and maybe save a life. Brianna agrees but only if Seesaw returns to free her from her current life. Meanwhile, Sangster Sr. revisits his pain and his upbringing through a monologue and a series of flashbacks. This minor story arc is woven throughout the book and by the end, we get to what Sangster Sr. has held on to his whole life: He made a promise to himself to not be like his abusive father. We learn that he regrets that his mistakes have been passed to his son and that they caused his son to suffer. Parallel to this story arc is a series of panels educating the reader on the forces the writer calls “vibration” and define it as the great source of all life. Furthermore, the writer labels the enemy of vibration as the dark realm and states that it is an enemy of human life and at odds with the goals of the great source of life. Vibration has at its heart the goal to have all become one, in harmony, connected, with serenity. The dark realm is about pain, hurt, and chaos. The dark realm is about cultivating fear which leads to power struggles that end in cruelty and death.

The spiritual elements of this book that depict a great source of life and a dark realm fighting for supremacy will be familiar for those who have knowledge of religious stories. However, this story is not a parroting of these stories. It feels unique because it is embedded in the context of socio-political issues, cultural contexts, and historical traumas for marginalized people. The story does well to inform the reader that these tragedies have not only harmed marginalized people, but it has also destroyed the dominant group, as well. The writer communicates that the dominant group has been a pawn in a larger war with forces of good and evil vying to win a final war that begins on the streets of Philadelphia. The metaphors are plentiful and the individuals and city chosen for the battle are not meant to be taken literally. The city could be any city. The people in power could very easily be CEO versus former presidents of the United States. The point made is that larger forces are at play and humanity must wake up and learn how to fight this battle let alone win it.

The larger themes of the book are interesting; however, individual characters are equally intriguing. In this issue, I was most interested in Seesaw, who carried the burden of saving a woman ready to give birth, and Sangster Sr. who carried the burden to save his son from his mistakes. A parent’s fear of passing their sins down to their children is a relatable one and despite its familiarity does not feel misused or a trope in this story. The writer has carried the father-son story arc through each issue; however, this story comes to a focal point because the vampires are so close to winning. Sangster Sr’s loss feels connected to this loss because he is now a vampire and he does not want his son to become a vampire, like him. Abigail’s dark purpose to gain the supreme leadership role of the vampires is complex as well. The desire to break a cycle of patriarchy is mixed with the goal of possessing humankind in a way that removes the human race of choice by making them vampires like her. This is a rich and complex book. Overall 9/10