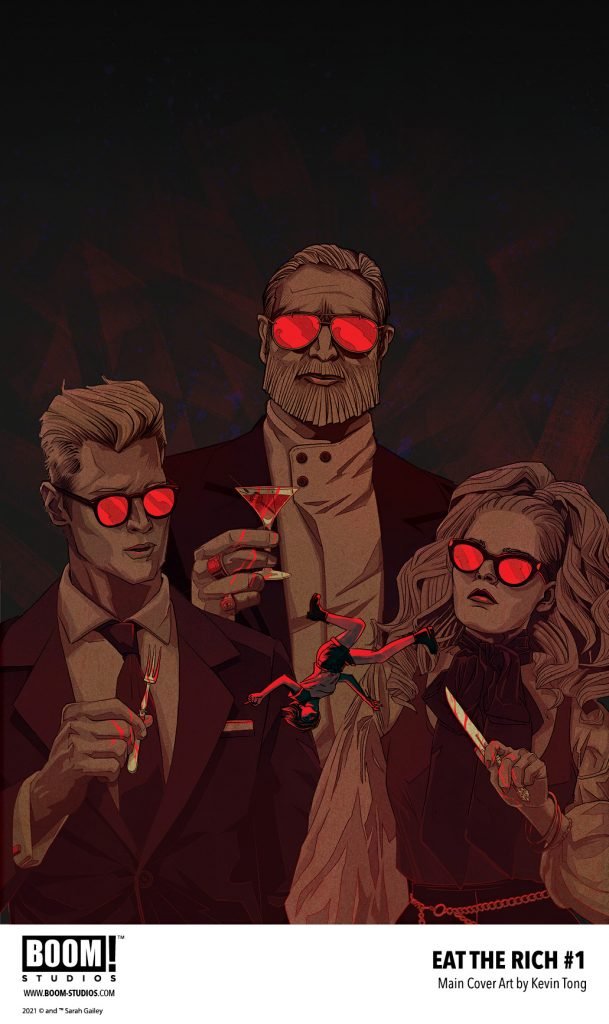 I can’t hear Eat The Rich without hearing Aerosmith. Their hit song of the same title encapsulates a growing emotion in the American zeitgeist. Wealth inequality began to grow in the 80’s, and by now, the issue has ballooned into an omniscient topic, accelerated by a global pandemic which created clear winners at the top. The fear of the rich and their seeming distance from the rest of humanity creates an alien quality of the world full of understood rules and seemingly trivial details. This growing unease creates the perfect environment for Eat The Rich.

Joey and Astor drive to Astor’s hometown of Crestfall Bluffs. Astor has avoided returning since he stopped drinking. (He started at the age of 12.) It’s unclear how they’ve formed a connection but the reader can assume they met in college. They are both in college, with Joey planning on snagging a gig at a top tier law firm. Joey comes from the lower class though, and she frets she won’t be able to blend in with the Old Money.

As soon as they arrive, Joey senses she doesn’t belong. Her clothing fails to match the dress code of Astor’s family. She attempts independence and shows kindness to the help, which further alienates her from the family. In the house, the help rushes to get ready for the retirement party of the Rockweather’s groundskeeper. Maids scrub the floors, while butchers chop the meat. Muscular men move crates. And Joey fails the unknown tests.

Joey retreats to the beach. There Petal, the nanny, informs Joey she needs to toughen up if she wants to make it in Astor’s world. The toddler being watched eats some “sand” while finding a macabre artifact on the beach. Petal takes the child in, indifferent or oblivious to the beach litter, he now teethes on. Joey, wrapped up in her own world, notices nothing.

Later at the party, Joey breaks dress code, wearing stripes when everyone is wearing white based solid colored outfits. Astor and Joey run into Astor’s old friend Bumper, who gets pulled away to “roast” the guests and groundskeeper at the party. Each person mentioned leaves the party, and Joey, feeling overwhelmed by the partygoers, escapes back to the beach. There, she learns a dark secret central to Eat The Rich. Ready or not…

The writing from Gailey sets the tone perfectly, couching the language of classism as a series of microaggressions. The metaphors, central to the series concept, fit perfectly with the themes of the series. You understand Joey’s anxiety viscerally, and you relate to the very real discomfort and pressure of being the “Have-Not” in the room.

The art by Bak features clean lines and details, tuning the reader into the higher class world of Crestfall Bluffs. Every panel exudes luxury. The colors by Titov rely heavily on oranges and blues, creating a bright world that belies the nature of the town. (Again with the metaphors. This team understood the assignment.) The letters and grammar of the story emphasize not just with bolding the words, but with constant hesitations, from the unsure Joey to the distracted Astor who pays her little attention.

I love the growing importance of class in horror, as the genre acknowledges the struggles of the outside world more and more. The horror feels more real than when its just a guy with pointy gloves.

Verdict: Buy! Eat the Rich #1 perfectly creates the world and conceit of the comic. The hostility towards Joey comes across not just in the dialogue, but in the art in every panel. I can’t wait to see how this story unfolds.