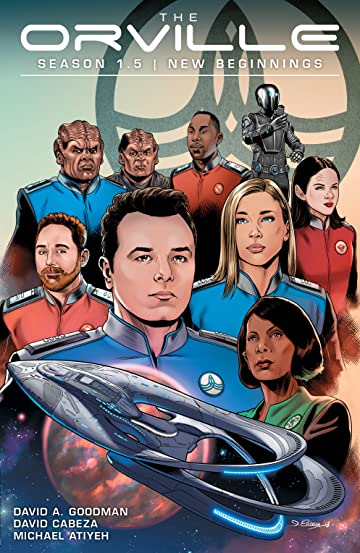 This issue explores the storyline introduced during the second season of the Hulu original series by the same name. The story is told through the perspective of Kelly Grayson, who is on board the USS Watson and set to rendezvous with The Orville. It is through her inner monologue that we learn that she was transported through time to the future, met her future self, and is reintroduced to previous shipmates, like Bortus the ship’s security officer, and Lamar the ship’s engineer. However, it is when Kelly meets Ed Mercer, who she was previously married to and then divorced, that memory of her previous life bubble up. She is living in a parallel time where events that happened in the other time may not occur. The dilemma is that she must decide whether to warn the fleet that Isaac, the robot on board, may have the ploy to attack Earth; she must decide if what happened in the other reality is happening in this reality.

The character interactions, which involve the use of irreverent and sophomoric humor, and human connections provide the intrigue in this story. The jokes involve witty puns and play on words that twist the meaning of words depending on the situation. In other cases, characters ask very direct questions about highly personal topics to other characters at inappropriate times. If you enjoy this type of humor and how it plays out in the Hulu original series you will probably enjoy this too.

The art is strong for this type of book, which cannot be overly creative because it strives to capture the visual aesthetic of the T.V. series. However, the renditions of faces, postures, emotional reactions of characters are spot-on in a way that reminds the reader of the human connections these characters experienced having worked together. The spacecraft, the space scenery, and other parts of the visuals are basic but well-crafted.

The biggest pitfall to creating a book that is a mirror reflection of a television series is either parroting the original story or becoming too creative and losing the audience. This book does neither. It provides plenty of humor that is an extension of the dialogue developed in the show. In other words, it is more of what is good about these characters. The story is not overly complex; however, it isn’t meant to be. The point of this story is to provide relief from the monotony of life and play with the complexity of human interactions – not to discover whole new worlds. Overall 7.5/10  How could it have been better?