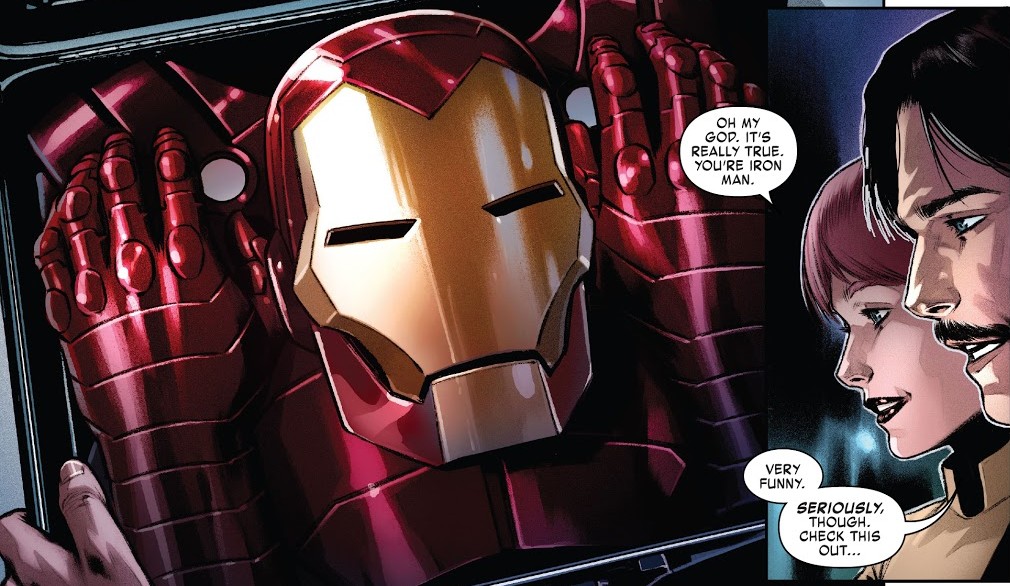 When I was a kid, I faithfully collected each issue of The Official Handbook of the Marvel Universe: Deluxe Edition. I didn’t have enough allowance and lawn-cutting money to buy all the Marvel comic books they were publishing, and I certainly couldn’t stockpile back issues, but reading through The Handbook let me know what I’d missed.

Some of my favorite entries came from Iron Man: armor schematics, cool weapons, the technocratic intrigue. I was never going to be born on another planet, magic isn’t real, and when wings didn’t spout from my shoulder blades on my thirteenth birthday I knew I wasn’t a mutant. But Iron Man and his villains were just guys in armor.

Anyone could do that. It was the perfect childhood dream.

Iron Man #1, out this week from Marvel Comics, captures the feeling of those classic stories and returns Iron Man to a simpler motif. After years of fighting cosmic and existential threats, Tony Stark now sports a simpler version of his armor (designed by Alex Ross) and faces one of his earlier foes, the Unicorn. Of course, there are bigger schemes in the offing, and Tony begins working alongside Patsy Walker, aka Hellcat, to begin the unraveling.

The writing is well done. Tony is struggling with his relationship with technology. It’s a thoroughly modern problem, made even more acute by his reliance and adeptness with tech. I enjoyed Tony’s search for a classic car without the fancy electric gizmos. I enjoyed less the inclusion of social media excerpts, and I hope the deletion of the @Iron_Man account means this convention is being abandoned. The Twitter and Reddit analogues felt too cute, and too out of step with Tony’s renewed interest in the analog.

The art is really great. Light sources glow without feeling artificial. The colors add a texture and depth to characters, costumes, and scenery equally well. It’s all new and old at the same time. That Alex Ross cover, rich with characters from Iron Man’s history, hits the right nostalgia marks without feeling dated. With luck, it hints at what’s to come.

VERDICT: One of the most solid re-starts of a series in a while, Iron Man #1 is a BUY. I hope this creative team can keep up the good work, because every kid needs to dream of flying around in a suit of armor.