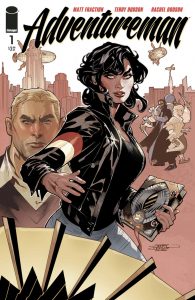 Buckle up readers because Adventureman #1 is here and if the opening pages are an indication it is going to be one hell of a ride. New York City’s skies are filled with zeppelin’s and biplane’s as lasers fire upon the unsuspecting citizens. The local law enforcement seems out of their depth and using a special phone with a signature emblem the police chief asks for help from Adventureman! Summoning his team, as a classic pulp hero is prone to do, Adventureman stands ready to assist his city until the minions of the villainous Baron decided to bring the fight to Adventureman. Yet what seems like a straight up tale of good vs. evil soon devolves into a mystery, a mystery of whether or not the adventures of Adventurman were real or simply a work of fiction. As the story transitions to who will no doubt be our main protagonist going forward (since she is on the cover of the book), Claire. Claire is the single mother of an Adventueman obsessed son (Tommy), so it is lucky that Claire is the owner of a classic book store and is able to obtain copies of the old Adventureman pulp novels. Claire is not as much into the heroic adventures, instead she likes the quiet life and nothing makes her happier then turning off her hearing aids and watching the world go by in peaceful silence. Claire also is one of seven adopted daughters of the Connell family, and apparently the least successful of the clan as her sisters are highly sought-after engineers, doctors, and lawyers as well as an athlete and even a chef. Yet even though Claire likes the quiet life the world has different plans and as a mysterious new Adventureman book finds its way to her store via a mysterious woman, who is then promptly abducted by mysterious men in black and the revelation that puts Claire in the middle of it all. Maybe the adventures were true? Maybe the stories were real? One way or another we’re going to find out in the pages of Adventureman.

Drenched in pulpy richness of a bygone medium Adventureman is a love letter to the pulp tales of yesteryear yet grounded in modern sensibilities. Any fan of Doc Savage, the Spider, or the Shadow is going to adore this book. Yet fans of great storytelling and breathtaking art are going to be on board as well as Adventureman #1 is an impress debut issue. Not that I was surprised since Adventureman’s creative team is an amazing cast of talent. Writer Matt Fraction, penciler and colorist Terry Dodson with inks by Rachel Dodson. Fraction’s story is engrossing, with a loving nod to pulp stories of the early 20th Century but with a modern sensibility of dialougue and characterization. Claire is an amazing new character and one grounded in reality and while she’s not your typical protagonist I found myself interested none the less. Terry and Rachel Dodson’s art has never looked better. From the classic Adventureman team, to the larger than life Connell sisters and the detailed action sequences each page of this extra sized issue was dripping in detail. I didn’t want it to end and I cannot wait for Adventureman #2 to reach my hands.

Verdict: Adventureman #1 was a delightfully strong introduction to this new pulp fiction revival and an absolute Buy in my opinion. With a wonderful story and beautiful artwork you can’t go wrong with Adventureman!