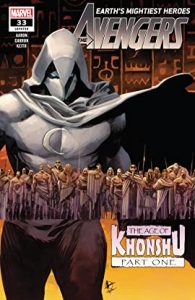 The Avengers have long been the premiere super team of the Marvel Universe. Well before the movies and mainstream fascination with the Earth’s Mightiest Heroes the Avengers were the heavy hitters for Marvel. Yet it hasn’t felt that way for some time. Ever since Jonathan Hickman used the Avengers franchise as the guide point to the world-shattering Secret Wars Marvel has appeared confused with what they want the Avengers to be. In the wake of Secret Wars they turned creative control to Mark Waid who took the team in a direction of youth as he included the new generation of heroes in Ms. Marvel, Miles Morales Spider Man, and the Sam Alexander version of Nova, while also using Sam Wilson Captain America and Jane Foster Thor along with Iron Man, Vision, and funded by Spider Man as Peter Parker was running a multi-billion dollar company at the time. It was an interesting take on the team but not the best take as it was stifled by Secret Empire but also never gelled in my mind. Mark Waid is a legendary comic writer but his Avengers will not go down as a highlight of his career, although in the wake of Secret Empire he did spin off the youth contingent of the team into the wonderful Champions book and was rejoined by his Impulse co-creator Humberto Ramos in what was a delightful read. Where Champions thrived, the Avengers felt muddled and rudderless. Enter Jason Aaron, arguably Marvel’s top writing talent who was in the midst of what may be one of the best runs on Thor ever. I was excited. I anticipated the release of the first issue hoping for greatness. I’m still waiting.

Jason Aaron is one of my favorite writers in comic books. Ever since his time groundbreaking run on Ghost Rider and his fantastic Vertigo title Scalped I’ve sought out just about everything he has written. Aaron even got me to invest in Wolverine, a title I rarely read, not out of dislike for the character but the over saturation of Marvel’s top mutant throughout the ‘90s and ‘00s. Jason Aaron has written some of the best comic fiction over the last two decades and as I wrote earlier I think his run on Thor will be remembered along with the Lee/Kirby era and the Walter Simonson run as the top three periods in the God of Thunders storied career. So, I was quite excited when it was announced that Aaron would be taking over the adventures of the Avengers. Yet over the course of 32 issues Aaron I’m still waiting for Aaron’s greatness to shine.

The current roster of the Avengers is a powerful one, full of A list heroes like Iron Man, Thor, Captain America, Captain Marvel, the Hulk (She-Hulk), Doctor Strange, and led by the Black Panther. The newest Ghost Rider is also present as is resident Vampire Hunter Blade. No longer housed in Avengers Mansion but rather the current team lives in the hollowed-out husk of a long-deceased Celestial where they deal with Earth’s mightiest threats. Over the course of this current incarnation the team has dealt with the Celestials, Dracula and his undead Army, the Squadron Supreme, and the Shi’ar Empire. While the threats are big and bold, just as the Avengers should be, the dynamic just hasn’t come together for my liking. There are weird character interactions, the team seems to not be as cohesive as it should be with a core that are so well known to one another, and the living inside a Celestial is just doesn’t work, in my opinion. Yet I haven’t hated the title either and with this week’s addition I find myself more interested than I have been in some time.

I have an affinity for the Moon Knight. One of the most memorable comic covers of my youth was Moon Knight #29. Such a simple cover, two yellow eyes, and white fangs dripping blood over one of Moon Knights crescent moons throwing blades all  against a black void. I’d already been picking up the book, being written by Moon Knight creator Doug Moench and with breathtaking art by the great Bill Sienkiewicz, as I was fascinated with the white cloaked street vigilante. I was a little young to appreciate the depth of storytelling and nuance that the series held but as I’ve read it again and again it was groundbreaking both for story content as well as the development of Bill Sienkiewicz signature style, which is awesomeness. I have always enjoyed the mythological elements to the Moon Knight mythos and his connection to the Egyptian Moon God Khonshu and I’ve checked in on the character over the years but I became very excited when I saw that Moon Knight and his god Khonshu were going to be the the principle players in the newest Avengers arc and I could not wait to see Jason Aaron write a Moon Knight tale.

Avengers #33 begins the Age of Khonshu storyline. The story begins high in the Himilayan mountains on the edge of the ancient city of K’un-Lun, home of the Immortal Iron Fist. The Moon Knight looks rough, as his cloak has been lost and the rest of his costume is in tatters. K’un-Lun’s resident martial artist is eventually summoned to investigate the presence of Moon Knight, and the confrontation that ensues goes less than the way one would expect from Marvel’s greatest (maybe second) martial artist. The story then sees Moon Knight confront some of the most powerful Avengers (Thor, Doctor Strange, and the Black Panther) while also stealing the Ghost Rider’s Hell Charger. Moon Knight’s intent is unknown and his ability to rival some of Marvel’s heaviest hitters is a mystery that will no doubt be answered over the course of this arc. What is apparent is that the Moon Knight, a character with a long history of mental illness, has either come undone or his intent is what his God Khonshu has always intended. Either way, time will only tell the outcome of this story.

I was into this story from the opening page, and to get a little bit of Jason Aaron Iron Fist was an absolute treat. I love the new look of Iron Fist, established by Sanford Greene in the to short lived Power Man & Iron Fist reboot of a few years ago and to see Danny square off with Moon Knight was a joy to behold. Javier Garron’s art was clean and stylish, which really fit the dynamic action of this issue. Reading Aaron’s story was also a wonderful introduction to this new story arc, a story arc that might not fit into what my ideals of what the Avengers are or should be, but still Jason Aaron is an incredibly talented writer and it was great to see Moon Knight back on the main stage and in his classic outfit. Although they stylish all white business suit first introduced by Warren Ellis and Declan Shalvey was a nice change of pace the classic Moon Knight look is still by far the best. I’m hoping this arc leads to more Moon Knight, classic Moon Knight, a Moon Knight tinged in horror and suspense, just as he is meant to be.

Verdict: Buy.  Avengers #33 was an intriguing introduction to the Age of Khonshu and with the insertion of Moon Knight and the Egyptian moon god with an agenda I for one can’t wait to see what comes next.