Like every comic book fan these days, I am spending more time than usual going through back issues while I wait for some return to normalcy. While I pray for that return to come sooner rather than later, with everyone safe and healthy, I’ve appreciated the opportunity to dwell in a little nostalgia.

Thunderbolts is my favorite superhero comic of all time. All time. In my hierarchy of awesome, the teams fall Thunderbolts > Justice Society of America > Alpha Flight > the rest of the field. (We can discuss my tastes some other time, if you’d like.)

I bought Thunderbolts #1 when it was fresh on the rack at my local comic book store in Kalamazoo. This was 1997. The Internet existed, but not like it does now. Back in 1997, you could keep a secret.

And Thunderbolts #1 had a doozy.

The Thunderbolts were really the Masters of Evil, led by Baron Zemo, one of the evilist guys around! They were pretending to be heroes, so they could take over the world later. It was an amazing twist that perfectly dovetailed with Marvel’s recent Onslaught event. As I read it, my jaw dropped onto my dorm room floor.

The real beauty of Thunderbolts came later, though, when some of them, especially former-Beetle Abner Jenkins, realize that being a hero is actually a lot better than being a villain. This tension between the Thunderbolts who are finally listening to their better angels and the Thunderbolts who never renounce their evil ways continues thematically throughout most of the rest of the series in many of its incarnations.

For me, though, it always comes down to Abe.

Jenkins would have his missteps along the way, but he eventually pays his debt to society, and then he devotes his life to the Thunderbolts and the mission to offer other people a chance at redemption while doing some good in the world. 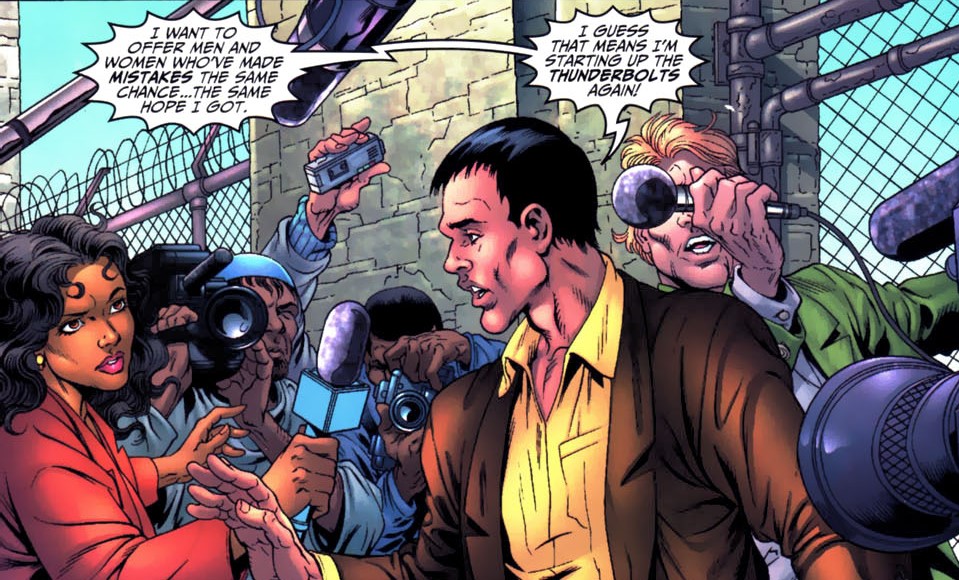 Because who doesn’t have regrets, either small ones or real big ones, about stuff they wish they could take back? The decision. The bad day. The folly and the grief.

Who doesn’t want a chance to grow? Who isn’t looking for forgiveness, for something?

For Jenkins, his growth centers around dropping selfishness and entitlement in favor of service.

For me, it starts with seeing the opportunity for second (and third, and fourth) chances in other people. It follows with looking for a way to set myself aside.

I hope we get more stories like Thunderbolts. I hope most of the stories aren’t fictional. Maybe a global pandemic will make looking at what’s really important, and judging a person’s true value, more of the norm.

Now wouldn’t that be a surprise twist?