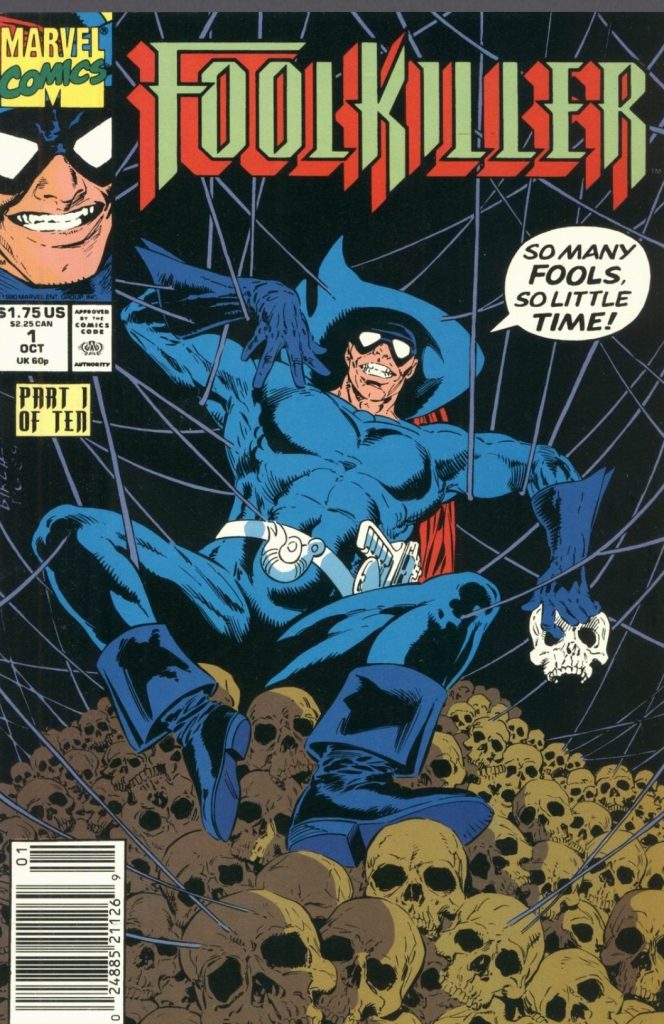 Minor characters have a way of crawling into my brain and hanging out longer than they probably should. And if there’s a Wikipedia rabbit hole to dive into for a few lost hours, all the better.

Foolkiller interests me in that way. His name is so straight to the point, so unhinged, but it’s contrasted by the flamboyant costume and physicality of the character. All limbs and grins.

The character was first introduced in a short arc in Man-Thing #3 (1974), but he was killed in the next issue. A second Foolkiller was introduced in Omega the Unknown #8 (1977).

The early 90s limited series introduces a third Foolkiller, Kurt Gerhardt, who adopts the vigilante identity with support from the second Foolkiller, Greg Salinger. It explores mental illness, poverty, race, criminal justice, and politics, though only to limited success at times. The book predicts some of the 90s’ comic book tendencies toward the “extreme,” but owes more to 80s grittiness exemplified by The Punisher and, even, The Watchmen.

You can feel the comic landscape shift as Gerhardt abandons the Foolkiller’s foppish floppy hat for a full-coverage leather mask. Comics were getting ready for the pouches and poses of the 90s; social commentary would soon take a back seat to style. As a piece of history, straddling two distinct approaches in comic book storytelling, Foolkiller is a more interesting artifact than I suspected it might be.

Steve Gerber, the book’s writer and all three Foolkillers’ creator, arrived at Marvel in the 70s, most-famously reinventing Man-Thing (and creating Howard the Duck). Gerber would have seen how comic books were trying to say new things about the genre and about the world in general, and his work always seemed to lean toward the non-traditional superhero stories. Foolkiller feels like Gerber is trying to push the thematic boundaries, he but just can’t avoid falling into some tired holes.

The book is successful, early on, and shows interesting promise as Salinger manipulates Gerhardt (via computer BBS!) into becoming Foolkiller. This is a complex relationship, fraught with a complicated power structure, spawned through the mediation of television and the Internet. Two men whose lives take big turns as a result of their interactions, but who never meet face-to-face. Too soon, though, the book abandons the relationship between the two men and becomes instead a fairly rote assassination fantasy. It could have been more.

Foolkiller’s fools remind me of Holden Caufield’s phonies in The Catcher in the Rye (written by a man who shares a surname with the second Foolkiller, as a matter of fact). Holden never acts upon his violent fantasies, but he never had a disintegration gun, either. While Holden focuses most of his scorn on those folks pretty much like himself, sadly for the series, most of Foolkiller’s targets take the same shape: poor and brown.

The series utilizes far too many racial and cultural stereotypes, as well. The drug hoodlums are all racial minorities; the folks with “real” jobs are all white. Small details like that leave a bad taste in the mouth, and they make you question the creators’ motivations.

The art on the series is above average, and the books make noteworthy panelling choices. The Watchmen-famous nine-panel grid pops up routinely. I find that layout lends the page a measured pacing, a steady beat. The book also features some nice depictions of talking-head media. This is a story connected to the communication technology zeitgeist of its time: early Internet connections and firebrand talk shows.

Ultimately, I finished the series a little disappointed, let down by what could have been. Maybe the book wasn’t reaching for something beyond the opportunity to show some fools disintegrated for their poor decisions, but it should have been.

VERDICT: A series that highlights the industry’s changing sensibilities in the very early 90s, Foolkiller is a time capsule of comic book history. You’re left wondering what else could have been said in the story.