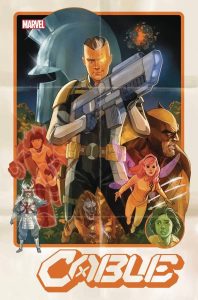 I’ve always had a soft spot in my heart for Cable. It has everything to do with how much l loved the X-Men in the ‘80s and early ‘90s and when the early Image founders started to put their stamp on the X-Universe I was more than happy to go along with the ride. When Cable, the militant revolutionary, replaced Professor X as the leader of the New Mutants who then morphed into X-Force under his guidance I was 100% into it. Looking back at those days I’m a tad bit embarrassed at how much I loved this era as the style far outweighs the substance Yet even as those stylish days have faded into the past the concept of Cable has continued to intrigue me. With one-part militant messianic revolutionary from the future whose body is ravaged by the techno-organic infection that only his incredible telekinetic powers keep at bay to the other part of time displaced Mutant, the son of Scott Summers and Madelyn Pryor (a clone of Jean Grey) who due to the techno-organic infection must be sent to the future for his survival. Add in some enormous guns, a hulking appearance, and a gritty exterior what wasn’t to like. As the X-Universe changed and evolved over the years the importance of Cable has increased and decreased regularly. He had a couple of long successful series and then been shuttered to the back ground to only reappear with a sense of bravo and importance. We are currently in the latter phase of Cable since in many respects we have a new Cable, a young Cable who is attempting to integrate himself into the larger X-Universe and to be a focal point in the new Dawn of X.

Cable #1 is the newest Dawn of X title and the first to star ‘young’ Cable. Ever since 2018’s Extermination the resident Cable is a far younger version then the classic. The current Cable travelled back in time to eliminate his future version since his future iteration failed to maintain the timeline and became complacent with the fact that the original five X-Men had been brought to the present during the entire All New X-Men era. This ‘young’ version has since replaced the ‘old’ Cable amongst Marvel’s mutants; you truly have to love comics. Other than an all to brief yet fantastic X-Force series there has been much done with the current Cable. That is until now.

Cable #1 was yet another great first issue in the now sprawling Dawn of X era of the X-Men. Yet Cable isn’t just another X-Men book as it isn’t just another Marvel mutant book but it also incorporates elements from both Marvel’s Monster books and long neglected Cosmic Marvel elements. The title opens in the Quarry, a Thunderdome esque proving ground where mutants battle each other in front of a crowd and records are recorded for what I can only anticipate a bracket of some sort for an eventual champion. Long time Mutant fans will be entertained by the long debated who would win in a fight- Wolverine or Cable- that was often debated throughout the late ‘90s. While an entertaining opening the true meat of Cable #1 picks up when Cable’s date with Pixie and Armor is interrupted by a young mutant in need of help. Back in X-Men #2 (2019) the island of Krakoa (home of the mutants) merged with its long-lost love, the island of Arakko (home of the monsters). Since this merger the Monster side of the island has been off limits, but then when do children listen to rules. So Cable’s date quickly turns into a rescue mission and an excursion into the Arakko region of Krakoa really gets this story going as shockingly Cable, Armor, and Pixie come into contact with a monster, which leads to the discovery of a sword that has ties to, of all things, Rom the Space Knight of Galador. It is an unexpected inclusion but not the most shocking element of the title as the last page cliffhanger will leave readers scratching their heads and wanting more right away.

I loved Cable #1, far more than I thought I would. I shouldn’t have been too much of a surprise as Gerry Duggan has become one of my favorite Marvel writers, both for his contemporary story telling but his wonderful links to bronze age Marvel stories. His Uncanny Avengers series is still one of my favorite modern Avengers series and his Marauders has been one of my favorite Dawn of X titles. The addition of Phil Noto’s self-described ‘retro paperback cover’ style was a perfect fit for this title. From the beautiful movie poster style cover to the detailed panels with their rich color tones Cable #1 was an artistic tour de’ force. The storytelling of Cable #1 was excellent and how Duggan weaved in the Space Knights of Galador was completely unexpected but it somehow worked. I loved Rom: Spaceknight as a kid and for a licensed book it was so well done and became incredibly  intertwined with the larger Marvel universe. Sadly Marvel lost the rights to Rom but since they created the Space Knights of Galador and they have appeared here and there over the years but this is the first time I feel truly excited to see them again. Where this book goes, I do not know but I cannot wait to find out.

Verdict: Buy! Cable #1 was a fantastic first issue to the newest Cable series. With great writing from Gerry Duggan and beautiful artwork by Phil Noto this was a wonderful first issue that fit perfectly into the new status quo of the X-Men but has brilliant call backs to Marvel’s Bronze Age and it leaves the reader wanting the second issue right now.