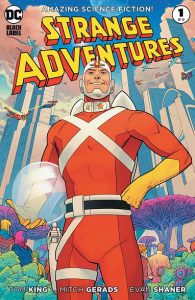 Adam Strange, one of DC’s original Science Fiction Heroes, is back in a surreal thought experiment that is Strange Adventures #1. Tom King and Mitch Gerads, fresh off their deconstruction of Mister Miracle, are joined by Evan Shaner in this newest iteration of Adam Strange. Adam Strange is a hero born of the ‘50s and very much a character inspired by the incredibly popular Flash Gordon serials and comic books of the day. An earth-based archeologist who becomes a hero when a Zeta Beam transports him to the Planet Rann, where Adam dons a red flights suit with a jetpack and ray gun. On Rann he meets the love of his life, marries, has a daughter all while becoming the protector of Rann and periodically being transported back to Earth when the Zeta beam wears off. Strange was a popular hero in the ‘60s and ‘70s but saw his popularity wane in the ‘80s before a resurgence in the ‘00s. In recent years Strange has worked alongside the Justice League, helped defend Rann in the Rann-Thangar War, and has been omni-present in almost all DC comics set in outer space. Yet none of that matters now as it is time for King, Gerads, and Shaner to deconstruct the once great science hero.

Life is definitely different for Adam Strange as Strange Adventures #1 opens up. Strange and his wife Alaana are living on Earth and are on a very popular book tour detailing Adam’s exploits as an intergalactic hero and defender of both Rann and Earth. Adam’s book signings are heavily attended and talk shows are inviting him on to hear of his incredible exploits. Adam seems to be the toast of the DC universe with a level of popularity he may have never achieved before that is until Adam is confronted by an agitated fan who eventually is found dead and all eyes turn to Adam Strange and his ray gun. Yet not all is as it seems Intertwined within this story is the tale of how Rann fell to an invading alien race and how the choices Adam made on Rann are starting to affect his life on Earth and the lingering question is, what happened to Strange’s daughter Aleea?

Tom King and Mitch Gerads are old hands at this deconstruction of an iconic super hero at this point. Coming off of last year’s brilliant Mister Miracle, where this duo tore apart Scott Free and his wife Barda in a fashion rarely seen in comic books. Now it’s Adam Strange’s turn and just like in early issues of Mister Miracle what we see is not what it is. There are obvious deep emotional scars affecting Adam Strange and everything that is happening around him feels like a fog of reality and Adam is having a difficult processing his new reality. Juxtaposed to this story is the fall of Rann as it is invaded by yet another alien race, but this time it is different as Adam cannot save them all. Both stories run parallel to each other in the book and it was a brilliant choice to bring in Evan Shaner for the Rann story as his classically clean pencils are not only a perfect choice for this retro story but they are so drastically different from the sketchy dark lines of Mitch Gerads that it is immediately identifiable to the reader which part of the story is in. The page layouts were amazing as rather than giving us one page of Shaner and another page of Gerads the panels themselves are intermingled that not only enhances the story but really touches on that there are darker issues here and things are not well with Adam at all.

Verdict: Buy! Strange Adventures #1 is an absolute brilliant first issue with a tour de’ force of a creative team that has the potential to be the talked about book of the year. Don’t miss out and get in on the ground floor of what is no doubt going to be an incredible 12 issue maxi-series.