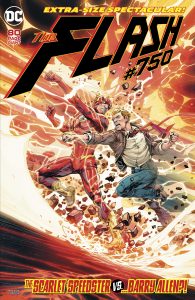 DC has been on a nostalgia tour as of late. It started with Action Comics and Detective Comics during the initial Rebirth, as those two titles reverted to their classic numbering as they neared the historic 1000 issue mark. Then earlier this year it was Wonder Woman #750, which was a giant size issue crammed full of great stories of everyone’s favorite Amazonian and her exploits over the years. Now it’s the Flash’s turn as the Flash #750 arrived this week and it is a true celebration of all things Flash.

Flash #750 is a giant-sized issue (80 pages) and full of great Flash material and a few pages of mediocre Flash material but thankfully, in my opinion, there isn’t any bad Flash material within this book. With a book of this size you’re not always guaranteed that everything is going to be above par. The main story is a continuation of the ongoing Flash book as we get not only a look at how Barry Allen’s actions as the Flash have saved countless lives but Iris Allen takes a deeper dive into specific stories of individuals who would either not be the same without the Flash intervening or wouldn’t be with us any longer if the Flash wasn’t around. There are some wonderfully endearing stories that truly show the impact the Flash has had on the citizens of Central City. This tale also has Barry solving a crime in only a way the Flash can and as well as sets up the next Flash arc and new villain, Paradox, who was created by the Flash’s constant rewriting of reality and will no doubt play into DC’s new 5G or the next Crisis (which honestly is probably one in the same). I’m not a 100% sold on this upcoming arc and the entire 5G concept but I do trust Joshua Williamson and his run on the Flash has been a high point for me of the entire DC Rebirth. The beginning of this story, with the personal stories was a solid read and I love stories where we get the average citizen POV. While this story was all set up for what is to come it had some perfect Flash beats for every fan of the World’s Fastest Man.

After this main story we get some wonderful vignettes of the Scarlett Speedster by some A List creator’s, almost all of whom have some connection to the Flash. These are short stories that each focus on a Flash (Barry, Wally, and Jay) and one wonderful tale by Geoff Johns and Scott Kolins featuring Johns favorite Rogue Captain Cold. This would have been my favorite vignette, as it perfectly captures who Captain Cold is and how even though he is a bad guy he’s not a bad guy, yet I quickly feel in love with the story by Marv Wolfman and Riley Rosmo which dealt with Barry using his speed and science to capture the Mirror Master. It’s a great little story that has a legendary writer joining with one of today’s finest if not underrated artists and full of call backs to Flash stories of yesteryear that was a delightful tour down memory lane. Rosmo needs to draw more Flash comics as his style is a perfect fit for the Flash. The Johns and Kolins story was a close second and it was great to see these two classic Flash creators reunited as they first teamed up on the legendary Geoff Johns run. We also get a Francis Manapul and Brian Buccalleto story, which was fitting as these two guided the adventures of Barry Allen in the post Flashpoint New 52. There was a great Jay Garrick story that only makes me more anxious for a return on the classic WWII era Justice League. This story was also by Joshua Williamson with stunning art by David Marquez, which makes me hope these two are working on a book in a similar vein for the near future. The final tale is a continuation of the recently completed Flash Forward where Wally West, once a Flash now sits on a Metron’s Mobius Chair as a protector of all reality. This story was brought to us by the Flash Forward creative team of Scott Lobdell and Brett Booth and just like parts of the main story this vignette points at a looming Crisis and how all the worlds of the DC Universe are once again threatened. I was less than impressed with Flash Forward and I got a similar vibe with this story yet I have no doubt that this is going to play an important role in the looming Crisis that DC is building toward, but I hope Wally’s future adventures are handled by a more talented writer. All in all the talent on these stories was a stellar combination and led to some truly great Flash stories, which were a worthy addition for this monumental issue.

Verdict: Overall the talent on the Flash #750 is worth the investment. The Flash has already been a highlight of the DC Rebirth, for me, and this issue has a solid lead story with some truly great back up stories and in my opinion it is a Buy!