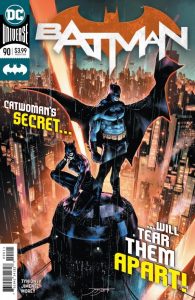 Since he took over the title with Batman #86 James Tynion IV has been putting the Dark Knight through the paces. Four deadly assassins have appeared in Gotham, hired by an unknown benefactor, to carry out a series of assassinations on Batman’s Rogues Gallery. If this wasn’t enough there is also a series of crimes being carried out that have nearly crippled Gotham City, which is still reeling and rebuilding after the occupation of Bane. Aiding Batman is Catwoman and Harley Quinn. Yet during the first four issues of this arc it’s unclear as to why this is all happening. It has felt like Batman has been sticking his fingers in a dam that is about to burst without a clue as to what caused the breaks too being with. All we do know is that the city is in danger and Batman’s Rogues are running scared from the sins of their past, and Catwoman villainous history is about to catch up with her.

Batman #90 takes us back to the early days of the Dark Knight, when Batman was still learning his ways and attempting to be a positive role model for the original Robin. The criminal element of Gotham was learning that if they dressed up in garish costumes, they had the potential to become super criminals and hopefully rule the Gotham Criminal Underground. It was among these early days that an unknown entity, the Designer, a villain linked to early Gotham where he battled a hero reminiscent of Zorro, reached out to four of Batman’s early rogues- Catwoman, Riddler, the Penguin, and the Joker- with the promise of financial and physical aid to pull off their perfect crimes. While three of the villains are intrigued by the offer and already counting their loot or anticipating their power the fourth’s crime disturbs the Designer so much that the deal is off and the villains do what they do, which is incite murder and chaos. But the Designer wasn’t done, he had simply gone into hiding until a moment he could unleash the perfect crimes, their perfect crimes, back upon Gotham while putting the lives of the four rogues in the crosshairs. Now it falls to a more mature Batman and his allies to not only once again save Gotham but also Wayne Enterprises and the Wayne Fortune so that the city can continue to rebuild.

James Tynion IV’s run on Batman has been an incredibly fun read since he took the title over. But Batman #90 was a step above the previous issues and that all has to do with the addition of Jorge Jimenez on art. Jimenez, fresh off of the Justice League, is a breath of dark air on this book. His stylized art is a perfect fit for Batman and he adapted his usually bright style with darker and grittier elements that fit this storyline to a T. It was also nice to see retro versions of Batman’s villains, especially Catwoman’s classic purple skinsuit that hasn’t been around since the ‘90s. With Tynion IV already telling a magnificent story and the addition of Jimenez’s art  Batman continues to be a must-read book.

Verdict: Buy! Batman #90 is another fantastic issue and the addition of Jorge Jimenez on art was a stroke of genius by DC editorial as it only amplified an already great comic.