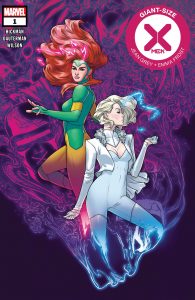 Giant Size is a designation synonymous with the X-Men since the entire zeitgeist of the X-Men and the behemoth that is is the X-Universe began with the relaunch of the of the X-Men franchise with Giant Size X-Men #1 in 1975. Now that we have entered the Dawn of X Jonathan Hickman has decided to revive the concept in a series of Giant Size Specials that will star several well-established X-Men. Joining Hickman on this is a stellar group of artists and it all begins with Russell Dauterman and Giant Size X-Men Jean Grey + Emma Frost.

Storm has been injured. During her conflict with the Children of the Vault in X-Men #1 she was infected and that infection is starting to take ahold of her as her comatose body is found in the fields of Krakoa. Yet with Storm comatose it falls on two of the X-Men’s most powerful telepaths to delve into Storm’s mind to see what is wrong with her and what can be done to save her. To figure out what has occurred both Jean and Emma are going to have to work their way through Storm’s psychic defenses and delve into what makes the X-Men’s favorite weather manipulator tick. Through the incredible artwork of Russell Dauterman this journey is one of the most enjoyable X-Men books I’ve read in some time. With great interplay between Emma and Jean, who were once sworn enemies to being possibly something more that that in this new mutant status quo where relationships are open and making new mutants is a commandment from Professor Xavier. This interplay and the awe-inspiring mind scapes make Giant Size X-Men Jean Grey + Emma Frost is an incredible psychic journey.

Anyone looking for a dense Jonathan Hickman story with pages of text pieces should look elsewhere as this is not that book. Giant Size X-Men Jean Grey + Emma Frost is a nearly silent issue with the psychedelic artwork provided by Dauterman being the overarching story guide. I wondered when I opened the book why Dauterman was listed as a story teller but as I got into the book it became crystal clear that his beautiful artwork is the meat of this story and the narrative device for 99% of the story. I’m not sure I want a silent issue all of the time but just like the classic GI Joe #21 and then the near perfect silent issue of New X-Men #121 by Grant Morrison and Frank Quitely (which Giant Size X-Men: Jean Grey + Emma Frost is an homage to) I have no problem with the occasional experimentation. I don’t know what the next Giant Size X-Men issues will be but after this issue they have a high bar to follow.

Verdict: Buy! Giant Size X-Men: Jean Grey + Emma Frost is an incredibly brilliant book that has a compelling story that truly relies on the magnificent artwork of Russell Dauterman to tell its tale. It’s not what I expected when I opened the book but it is exactly what I wanted when I finished it up and I can’t wait to see what the next Giant Size X-Men have in store for us.