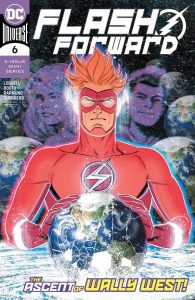 Wally West is my Flash. I’ve written this before and it holds true today. I respect Barry Allen and will read almost any adventure of the Flash but when it comes down to who my favorite Flash incarnation is it will always be Wally West. Maybe it was the fact I was a rabid fan of Wolman and Perez’s the New Teen Titans where Wally was a prominent fixture for many years. Or it may be the utterly fantastic Mark Waid run that defined the character for a generation. More than likely it was a combination of the two but when it comes to Flash’s mine has always been Wally. Until it wasn’t. Not that my fondness for Wally declined, in fact it was the opposite. It was DC who decided that they no longer liked Wally. Geoff Johns brought Barry Allen back in Flash Rebirth and Wally was pushed to the side. Then John’s Flashpoint ended the DC universe and Wally (the original Wally) wasn’t even present. Then DC Rebirth hit and suddenly Wally was back and a central figure in the line wide relaunch, until again he wasn’t and was shunted to the back of the line and buried in the lackluster Titans title that tried too hard to be Wolfman and Perez for grownups. With Rebirth all of the incredible world building and maturation that Waid had done with the character was ripped away. The happily married father of twins was no more and Wally was just a void of a character, a shell of what he could be. Then he became a murder in the pages of Heroes in Crisis, in a situation that felt like a complete retcon from issue one as the how that book started and where it concluded just do not fit together at all. It was as if DC editorial stepped in and changed the direction and revolution of the killer to suit their needs. Then it was DC’s attempt to revive Wally and restore him to the incredibly deep character that his is supposed to be, but in true DC fashion they fumbled this as well with the subpar Flash Forward.

Flash Forward felt like a weak attempt to rebuild the Wally West mythos in the wake of all that had been done with him as well as delving into the concept of the Dark Multiverse started in Scott Snyder and Greg Capullo’s Dark Nights: Metal. Sadly it failed to be anything other than a confusing read that transported Wally from one alternate earth to another to stop the buildup of Dark Matter that threatened to destroy the multiverse. Apparently Wally is the only metahuman who can achieve this and was tapped by a relatively unknown cosmic entity known as Tempus Fuginaut whose tasked with making sure other universes don’t penetrate the prime earth’s universe. If it’s the Multiverse and with Wally’s deep ties to the Original Crisis on Infinite Earth’s I don’t know why the Monitor wasn’t used (maybe he is too busy in the pages of Justice League) or any Monitor. Over the six issues Wally has run into some interesting alternate earths but with the quick tempo of this mini-series there was very little extrapolation. What could have been some fun stories were disappointingly over in a few pages. Just like the character this series was moving at high speeds but sadly without much train of thought and Flash Forward #6 was luckily the end of what will hopefully be a forgotten tale but more than likely will have universal impact at some point in the near 5G future. In the wake of last issue Wally has finally been reunited with his twins, Irey and Jai, who have been apparently trapped in the multiverse and now the family are stuck on a world infested with Dark Multiversal Energy that if left unchecked will destroy every bit of existence. Wally needs to decide if he can destroy this earth and risk losing his children forever or allow for the entire multiverse to be destroyed but save his kids, although they too would be destroyed if everything is destroyed. Correct? Luckily Tempus Fuginaut arrives with a Mobius Chair and an impossible choice. What will Wally do?

-You probably know what he does.

I kind of hate myself for reading Flash Forward. In a better writer’s hand this could have been an interesting read or if a quality writer was given time over an extended series to deal with Wally and the Multiverse, since the Flash has always been at the center of the DC Multiverse. But six issues was not and Scott Lobdell was not the right writer. While Lobdell was a prolific ‘90s writer with long runs on Marvel’s X-books and then at Jim Lee’s Wildstorm Studios the current comic environment is not a place he knows anymore. His hyper sexualized Starfire in the New 52’s Red Hood & the Outlaw’s had nothing to do with empowerment and everything to do with turning a classic DC hero into a teenage fantasy of a sex doll. I beat myself up for picking up a Lobdell book over not only his treatment of Starfire (among other female characters) but also for the admitted inappropriate comments he has made over the years but sadly I chose poorly to read Wally West. I shall not make this mistake again. Now what was a nice ‘90s return for me was the artwork of Brett Booth. In the ‘90s Booth felt like the perfect Image amalgamation of Jim Lee and Rob Liefeld. Booth also found a home at Lee’s Wildstorm Studios and his long run on Backlash was a favorite of mine at the time (don’t judge). While his work has evolved somewhat it doesn’t work on a lot of titles but it does with the Flash. His elongated figures with lean muscles fit perfectly with what the Flash should look like. I enjoyed his artwork on the New 52’s Flash and it was the one highlight of Flash Forward, well that and Doc Shaner cover’s. Overall Flash Forward was a tremendous let down and was just the continuation of the abysmal treatment of Wally West that began with the New 52, continued in Rebirth, and now seems to be the status quo as DC’s most mistreated hero.

Verdict: Flash Forward #6 was the lackluster and predictable conclusion of what has been the continuing mistreatment of the iconic Wally West. Apparently DC loves to completely F&$% with this once great character which led to this wasted chance to redeem the greatest Flash of all time and in my opinion Flash Forward is a pass.