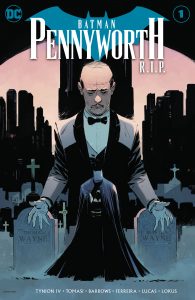 Alfred Pennyworth has fallen, a casualty of the City of Bane. The glue that bound the Bat Family together is gone and the ramifications are just beginning to be felt throughout the Bat-Universe. Now in the wake of Bane the city and citizens dig themselves out from the ramifications of the occupation. Gotham will be rebuilt. The scars of the Tom King run will be healed. Yet as Gotham rebuilds and as new structures and institutions replace those of the fallen. It is also time for Gothamites to mourn those who have been lost, and none more notable than Alfred Pennyworth. Batman: Pennyworth RIP is this chance to mourn, both for the Bat Family and for readers of the Bat-Universe who are feeling the effects of the loss of Bruce Wayne’s closest ally.

Batman: Pennyworth RIP is a stirring tribute to the longstanding institution that was Alfred Pennyworth. With an excellent collection of talent this issue allows for each member of the Bat Family to tell one of their favorite Alfred stories and how important he was to each one of them. What begins at a dedication ceremony for a new Children’s Hospital, built by the Wayne Foundation and dedicated to the memory of Alfred quickly shifts to seedy bar in the heart of Gotham where even the criminal underground thinks twice about going. It’s here where each of the Bat Family relate their best memories of Alfred. These vignetes are all wonderful representations of the power and faith Alfred Pennyworth had for each of his family members and how he truly was the glue that held everything together. Each story has a unique artist and the tone of each story shifts with whichever member of the Bat-Family is telling the tale. But one constant throughout is how important Alfred was to each one of them and how dearly he will be missed. Also on everyone’s mind is how will the family survive without Alfred as the future looks bleak without the consummate butler around to remind Bruce that he’s not alone and that he has a family that cares for him. 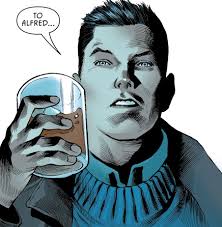 I was shocked when Tom King killed Alfred. Once that fateful scene was scared into my memory I expected a bait and switch, that it was a Clayface or another villain/hero who could mimic others appearances who was actually murdered. Yet it seems that DC is content with the death of Alfred (for now) and although I am saddened for the loss at least the passing of Alfred Pennyworth gives us Batman: Pennyworth RIP. James Tynion IV and Peter J. Tomasi really flex their Bat writing muscles with this special. It’s both heartwarming and heartbreaking at the same time. The reader feels the emotional toll each member of the extended Bat-Family is feeling as well as the notable absence of emotion from Bruce Wayne who for all intendent purposes lost his surrogate father. The collection of artists were an inspired choice as each lent themselves perfectly to the story they were given. It was especially nice to see Chris Burnham back on a Batman book as his work has been missed since the demise of Batman Incorporated. While the Burnham Damian Wayne Robin vignette was my favorite I still enjoyed every story within this book and found myself engrossed with each tale. Although I was saddened to see Alfred go (for now) at least DC let him be eulogized with this wonderful comic.

Verdict: Batman: Pennyworth RIP is the perfect eulogy for the loss of Alfred Pennyworth. It is both a heartwarming and heartbreaking read and a Buy for any fan of Batman and his trusty and eternally faithful butler.