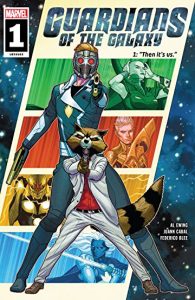 The Marvel Cosmic is in complete disarray. The Nova Corps are shattered. The Kree are embroiled in a Civil War. The Cancerverse has returned, first carving a path of destruction though the Negative Zone before emerging in the Positive Zone and laying siege under a revived Sentry. The three major galactic empires (Kree/Skrull/Shi’ar) are each scheming in secret and the old systems of order are breaking down. Now more than ever the Galaxy needs its Guardians but where are the Guardians of the Galaxy? On Vacation for some much-needed rest and relaxation and as a new threat emerges there seems little interest in returning to the front lines of danger and once again putting the fates of the universe in their hands.

The Guardians of the Galaxy #1 was an excellent return of this now classic galactic super team after what was a brief hiatus. The Guardians haven’t been absent from the shelves. Yet the most recent outing by Donny Cates wasn’t the team we have come to know in recent years with a mixture of past Guardians and some galactic heavy hitters like Beta Ray Bill and the Cosmic Ghost Rider. Instead the Guardians that we have come to expect ever since Dan Abnett and Andy Lanning rebooted the team in the wake of 2006s Annihilation and then immortalized by the 2014 MCU film have been resting and recuperating after their nonstop efforts to keep the galaxy safe. But the time for R & R is over as another threat faces the Galaxy as the Gods of Olympus have returned and they are the heralds of a new age of war across the galaxy as they have been polluted with darkness ever since their recent demise in Avengers: No Road Home. From the destruction of a Kree colony on Elysion-3 to the threat of destroying the entire galaxy the returned Greek pantheon pose a true threat to the entire Marvel cosmic. Sadly, the universe has never been at a weaker state with the constant state of violence and war that has been present for the past few years. Luckily there are still Guardians and even if not every Guardian is up for another galactic conflict their de facto leader Peter Quill, the Starlord, and weaponsmith Rocket (now ok with being called a Racoon) don’t know how to say no to an impossible situation or a suicide run. Along with Richard Rider, quite possibly the last Nova, the Grant Morrison created Marvel Boy and an eclectic group of past Guardians Peter and Rocket put together a mission to stop the Greek Gods before they can achieve their apocalyptic goal. Yet this is a Guardians book and nothing goes as expected, and we wouldn’t have it any other way.

The Guardians of the Galaxy #1 was a tremendous return to form for what has become one of Marvel’s most popular franchises. Al Ewing was an excellent choice to take over the writining chores for the Guardians, especially with the inclusion on the Greek Panthenon as Ewing was one of the writers who destroyed the Gods of Olympus last year in Avengers: No Road Home. Ewing also was the architect of Marvel’s most recent galactic super team in the pages of the Ultimates, so he is no stranger to cosmic threats threatening the universe. Ewing quickly drew me into the story and established that this is a Guardians of the Galaxy book in the vein of what Abnett & Lanning did over a decade ago and what Bendis was doing before he departed Marvel for DC. I also enjoyed the eclectic roster of now classic Guardian icons like Starlord and Rocket as well as fringe Marvel characters such as Marvel Boy, Phyla Vell, and Moondragon. Plus I’ll never turn down a chance to read the adventures of Richard Rider, the original Human Rocket. I’m not as familiar with the artwork of Juann Cabal but I was really impressed with his artwork. It was clean and realistic, as realistic as you can with a cosmic title full of aliens and incredible technology not usually present in a regular super hero book. The new looks for the Guardians were nice, and I loved that Starlord’s latest uniform is a modern spin on his classic look. Rocket in a suit is going to take some getting used to but it worked, as did this entire issue, which made it such an incredibly fun first issue of what will hopefully be a very entertaining entry into the saga of the Guardians of the Galaxy.

Verdict: The Guardians of the Galaxy #1 was a fun and entertaining first issue for what is a return to form for Marvel’s premiere cosmic super team. Al Ewing and Juann Cabal turn in some truly excellent work for what was a highly enjoyable first issue and in my opinion a Buy!