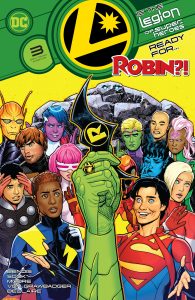 Superboy has had a long and storied career with DC’s most prestigious future super team, the Legion of Super-Heroes. Travelling forward in time it’s always been an honor of the Legion to fight alongside the hero from the past who inspired them to be the heroes that they are. Yet with Crisis after Crisis the link between Superboy and the Legion has lessened and lessened to the point it was nonexistent. This has had a dire effect on the Legion as they lost their link to the present day DCU and felt a little listless as it was rebooted again and again and then again. Yet in the era of Rebirth the Legion of Super-Heroes has returned as has the connection between the Legion and Superboy, but this time it is Jon Kent, not his father Clark, that has joined the teenage super team of the future. But Jon Kent is also a member of another team, more of a duo, as he and his best friend Damian Wayne, aka Robin, are the Super Sons and in Legion or Super-Heroes #3 Jon wants his best friend to join him as a member of the Legion of Super-Heroes.

Since its return the Legion of Super-Heroes has been operating at breakneck speed as it tries to figure out why Aquaman’s Trident has suddenly reappeared in the 31st Century and why so many of the futures less then reputable characters want to gain control of the trident. While one contingent of the Legion has traveled to Ultra Boy’s home planet of Rimbor to discover what their Warlord Leader Crav’s (and Ultra Boy’s father) role in the trident mystery. While another contingent of Legionnaires travel to the cleanest planet in the universe, New Gotham, to probe the mind of the Wizard Mordru to discover how he obtained the Trident to begin with and what he intended to do with it. Yet to Superboy the logical response is to go back in time and retrieve his best friend and master detective Damian Wayne. All three of these tales collide when every member of the Legion is recalled to their headquarters to deal with Superboy’s decision to bring “Little Hitler” to the future as well as a rampaging Crav who even the Legion’s heaviest hitter, Mon-El, is having issues with. While the story doesn’t progress much the Legion of Super-Heroes #3 is yet another fantastic story of the world’s greatest future super team and is full of fun situations, witty dialogue, and some great action sequences that really show off how powerful the Legion can be.

While many a faithful Legion of Super-Heroes reader may have issues with the Bendis interpretation I have been enjoying the hell out of it. The Legion of Super-Heroes was one of the first DC comics I read back when Baxter Paper and the Direct Market were in their infancy. I found it so cool you could only get the title at a comic shop and luckily I had found my first right as the Legion’s popularity was exploding. I checked in with the Legion over the years but it has been some time since I read a Legion book that felt like the Legion of my youth, and while this is not that book either it is the most enjoyable Legion book I have read in some time. Bendis has taken the mythos of the early ‘80s heyday of the Legion and but his Bendis twist on it. This is not the future of the DC Universe I have ever seen before but it is a future that feels at home in the DC Universe of today. These Legionaries don’t look like the Legionaries of my youth but they all have a style and attitude reminiscent of those classic tales. With the addition of artist Ryan Sook this newest iteration had been a book I have looked forward to since it was first announced and now that it is here it is a title I can’t wait to read. With its multitude of characters, vast arrays of settings, and widescreen action the Legion of Super-Heroes has become one of my favorite DC titles. With Bendis’ witty dialogue and gift for writing teenagers (even those in the 31stCentury) this title has been a lot of fun and the Legion of Super-Heroes #3 was no different. The guest starring role of Robin was fun and the reaction of the Legion was intriguing and I hope an explanation comes sooner rather than later. The mystery of Aquaman’s Trident is an interesting conundrum that is only pulling in a larger array of characters that adds depth to this volume of the Legion of Super-Heroes.

Verdict: the Legion of Super-Heroes #3 is yet another enjoyable foray by Brian Michael Bendis and Ryan Sook (with a little help from Travis Moore). While the story doesn’t move forward the issue is still very enjoyable and gives great insight into this newest Legion iteration. While Bendis’ Legion might not appeal to everyone I have found it to be an fun and interesting return to DC’s 31st Century and is a Buy!