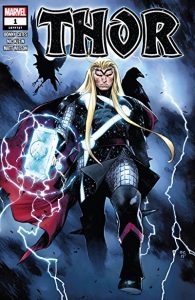 For seven years the Mighty Thor’s adventures were in the very safe hands of Jason Aaron. For over a hundred issues readers were mesmerized by an incredible run that saw Thor rise to incredible heights only to fall into unworthiness before reclaiming his rightful mantle, fighting a war of realms, and ascending to the throne of Asgard. With the dawn of 2020 it’s a new age for Thor as Asgard is restored, the seven realms are at peace with one another (relatively), and the throne of Asgard is once more filled. Its everything that Thor could dream of for his people even if it means retiring from his super heroics on Midgard and uncomfortably settling onto the throne of the Asgardian All-Father. Yet this is comics and nothing stays peaceful for long and what begins as a peaceful day ends with Galactus crashing into Asgard and a new cosmic adventure right around the corner.

Thor #1 is the dawn on of the Donny Cates era of the Mighty Thor and it is a very entertaining first issue. I wasn’t sure what to expect but I did expect good things since Cates is fast becoming one the best writers in all of comics and with two of his strengths being mythology and galactic stories Thor is the perfect character for him to write. Thor #1 was also an excellent introductory issue for the new status quo for not just Thor but also all of the Asgardians. Cates does a stellar job of picking up where Aaron left off, with Thor now sitting upon the throne of Asgard, yet makes the story all his own. He has stripped Asgard of all its grandeur, creating a simpler kingdom that is more reminiscent of who Thor is today. The addition of Galactus and his former heralds was a stroke of genius as it was unexpected yet the perfect departure from what Jason Aaron had been doing. The threat that the universe is facing is daunting and interesting. I cannot wait to see how Thor deals with this cosmic threat and what he becomes on the last page is an interesting twist that I will leave for the reader to discover, even though the cover does give it away if you think long and hard about it. Nic Klein’s art was excellent. It was detailed and had a beautiful combination of super heroics and fantasy, which is a perfect melding of styles for a Thor title. His depiction of King Thor was exactly how I imagined Thor would look after the past few years of his life, with all of the turmoil and stress he has endured. Klein’s facial drawings show the weariness within Thor and the loss he has for fighting the evils of the realms, which he gave up to sit on the throne of Asgard. Klein and Cates were a great pairing for this new take on Thor and I cannot wait to see what they do as the story goes cosmic.

Verdict: Thor #1 is an excellent first issue and the perfect transitionary story from the Aaron era of Thor to the Donny Cates era. It is a wonderful story with beautiful artwork and a great launch of the latest take on the Mighty Thor.