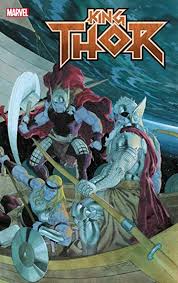 Seven years and a hundred plus issues later it is time for the Jason Aaron era of the Mighty Thor to come to an end. King Thor #4 is the exclamation point on what has been a historic run and quite possibly on of the greatest tenures of a creator on the exploits and adventures of Marvel’s God of Thunder. Over the course of seven years Jason Aaron has redefined and reestablished Thor as the most powerful hero in the Marvel Universe and he perfectly brings his story full circle in what is one of the most satisfying conclusions I have read in some time.

King Thor #4 is the final battle between Thor and Gorr the God Butcher. Having plagued Thor from Aaron’s first issue. At the twilight of the universe Gorr has engulfed what planet and stars in the darkness of his necrosword. Gorr intends to murder the universe and remake into his dream, a dark universe without gods. Standing between Gorr and his dream is a panthenon of forgotten deities, the Daughters of Thunder, a blinded Loki and one pissed off Allfather Thor, the God of Thunder. If any issue summed up Aaron’s interpretation of Thor it is King Thor #4. It was once whispered in Thor’s ear “Gorr was right” and for a time Thor was deemed unworthy to wield Mjolnir. Now Thor and his allies must show their worthiness and that at the end of the universe gods are needed more than ever and that Thor is the mightiest of them all.

With the perfect mixture of action and character study King Thor #4 is a magnificent end to the Aaron era. Yet buried within this issue are countless of other Thor stories I want to read as Aaron invited back all of his past artists for a look at what Thor will be in the future(s) and they look like incredible reads. There were also glances back at what has been and in retrospect this has been one hell of a ride. But sadly this is the end and it was wonderful that Esad Ribic’s artwork graced these final pages as it was Ribic who began this adventure with Jason Aaron back in 2012. His detailed artwork and fantasy stylings were always a perfect fit for Thor and to have him as the co-chronicler of the final Thor story was a fitting end. It was also a treat to see so many former Thor artists back on the title, even if it was only for one or two pages. Yet Thor will endure and with Donny Coates and Nic Klein set to take over the God of Thunder’s title next month I’m hoping for more good things to come and maybe another epic run to come.

Verdict: Jason Aaron’s Thor run has been an incredible ride and King Thor #4 is as fitting conclusion as there can be to the story and is an absolute Buy!