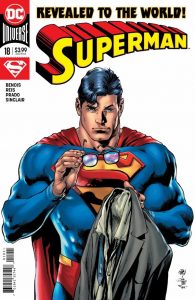 In the long history of super heroes the secret identity has been a constant motif. To protect their loved ones super heroes have adopted their masked or super identities to conceal who they really are. Yet in our media driven world where trust is a commodity and faith in institutions is at an all-time low does having a secret identity do more harm than good? Are they even needed anymore? This is the question that Superman has been pondering for some time now and has finally reached the conclusion that the answer is no.

Superman #18 changes the status quo for the Man of Steel for the foreseeable future. Since Brian Michael Bendis took over Superman’s adventures with the Man of Steel mini-series in 2018 he has gone out of his way to challenge a lot of the long-standing myths that comprise the history of Superman. From how Krypton was really destroyed to an unknown Invisible Mafia that has secretly been operating under Superman’s super nose for years. Yet over the course of the last year Bendis has been building toward the formation of the United Planets (UP) which will one day be the government that the Legion of Superheroes fights to protect. With this modern day UP being formed and Superman being chosen as Earth’s representative Superman wonders if it is fair for him to keep secrets from those he now represents to the entire universe. Superman comes to the conclusion that the answer is no. This decision then sets about an issue where Superman has to put all his affairs in order as he prepares to retire the Clark Kent identity and reveal to the world who he really is. In typical Bendis fashion the story is told in a nonlinear format as it bounces around from the actual press conference where the reveal is made to Superman notifying his inner circle of the truth. While Lois may have been preparing for this for years, since she has already written the story, others like Jimmy Olsen and Perry White are not prepared for the truth of who their friend is beneath those glasses and hunched shoulders. While Jimmy is lighthearted and funny the Perry White scene is an emotional masterpiece with a silent page that brought a tear to my eye. Listening to Superman’s speech as to why he’s made this choice and how his adoptive parents raised him to always do the right thing it makes perfect sense for this to happen, especially as American’s grasp for the truth and hope to have faith in their institutions restored.

I’ve really enjoyed Bendis’ take on Superman and Superman #18 was no exception. While a part of me is a traditionalist that likes the idea of a secret identity and the silliness of the fact that no one can tell Clark Kent and Superman are one in the same this move to reveal who Superman truly is doesn’t bother me. It’s a perfectly organic move from where Bendis is taking his story and how it ties into all of his DC titles. Ivan Reis and Joe Prado’s artwork was simply stunning. Reis has a classic quality to his work and his Superman has never looked better. You can also tell that Bendis trusts Reis as a storyteller since he doesn’t always clutter the page with dialogue. Clark’s revelation to Perry White was a point in particular that the impact would have been lost with a lesser artist. I’m enjoying the consistency of quality on this title and hope for a long run from these top-notch creators.

Verdict: Buy! Superman #18 is a historic issue with the revelation to the world of who Superman really is. Traditionalists may be upset with this move but it works perfectly with the grander story that Brian Michael Bendis is telling and is another magnificent issue of this stellar title.