I love Bond. I have seen every movie and played most of the video games, and I own most of the books. His popularity remains oversized decades after Ian Fleming created him. His adventures touch every continent and imaginable enemy.

Ian Fleming wrote the books using his knowledge of international espionage, through his work with naval intelligence during WWII and his work as a journalist before that. He lived a wealthy life full of comforts. He drank often and smoked constantly. The first published Bond novel, Casino Royale, released in 1953. The book was a smash. A TV adaptation occured the next year, with the hero played by Barry Nelson. The movies started in 1962, giving the character an incomparable cinematic streak. The films passed through phases of suspense, camp, and over the top action. With potential change on the horizon, another fresh start in the comics makes sense. 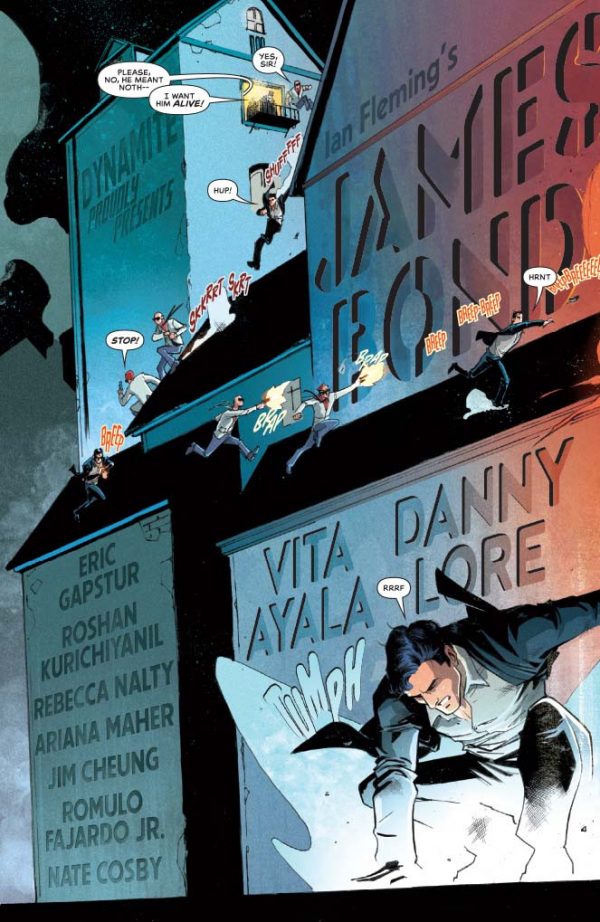 The issue opens with the eponymous hero caught sleeping with another man’s mistress. A fun two page chase across a roof top, ending in an excessive explosion later, the comic switches to the main protagonist for the issue, Miss Keys. She works as an insurance claim investigator for high end art. A piece by Rothko (one of the painters who do something seemingly simple very well) was replaced. She works with her partner Reese to investigate the theft. Just as the investigators realize they walked into something bigger than expected, Bond returns.

This issue in some ways barely feels like a Bond title. The hero disappears for most of the comic, only springing back to the foreground when needed. The insurance investigators investigate in very practical ways more reminiscent of private eyes. If you look at this arc as a Bond film, instead of just the issue, though, it makes a lot of sense. In a Bond film, the story sometimes leaves James to follow the action as it unfolds. And while he might not be taking up the whole panel, it doesn’t mean he is far behind.

I loved this issue. The comic avoids the pointless action with cliché villains, and instead, it creates a mystery to be unraveled. Often, we know the target from the beginning. Here, the larger plot remains a puzzle. Is the art theft connecting to arms smuggling? Terrorism? Traveling circuses aspiring to nuclear war? Its nice not to know. Ayala vies for breakthrough writer of the year, as her independent work now jumps to the major publishers. On the heels of debuting a Morbius series, she helms the master spy. Vita and Danny create a unique Bond story, relying more on plot than just bullets and babes.  The art by Gapstur features fluid action in the fights and clear facial expressions in the quieter moments. The colorists play with lighting throughout this comic, keeping a refreshing tone for the book.

Verdict: BUY! I loved this comic. It brought Bond into the 21st century without robbing him of any of his timelessness cool. The team clearly enjoyed creating this issue, and this looks to be one of the best espionage comics in years.