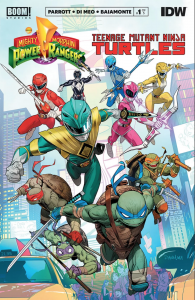 My ‘90s self would have been a very happy camper when it was announced that the Mighty Morphin Power Rangers would be crossing over with the legendary indie Heroes in a Half Shell, the Teenage Mutant Ninja Turtles. Luckily my 2019 self is just as happy and entertained by Mighty Morphin Power Rangers/Teenage Mutant Ninja Turtles #1(PR/TNMT). PR/TNMT #1 is the first team up for these two billion-dollar franchises that have endured and entertained for decades and seemingly have no end in sight. Although TMNT started in the ‘80s as an independent comic that was a gritty parody of the X-Men, Daredevil, and really all things Frank Miller it evolved into a mega-successful children’s franchise that started with a cartoon then ballooned into toys, live action movies, and became a true zeitgeist of the ‘90s as the Turtles seemed to be everywhere. Power Rangers had a different evolution, starting as an Americanized version of Japan’s long running Super Sentai series. With American teens gifted incredible super powers by a floating hologram and his trusty robot then splicing in the Japanese fight scenes when the Rangers helmets would mask the actors faces. The show was aimed at a younger audience but caught on with a lot of comic and sci-fi fans and became much see TV. The show evolved over the years with costume changes and new powers to mimic the Super Sentai series. Yet nowhere in the evolution of these two franchises have their paths ever crossed, until now that is.

PR/TMNT #1 is an incredibly fun and nostalgic first issue. Set in the first year of the Power Rangers (as the Boom title has been for the most part since its launch as well as the current second title Go Go Power Rangers). So, we have the five original rangers and of course the four turtles, each with the cartoon friendly assigned colors. The story opens in Angel Grove, home to the Power Rangers, as they defend the city from yet another monster attack from their arch nemesis from their first season, Rita Repulsa. Noticeably missing is their sixth member, Tommy Oliver AKA the Green Ranger but he won’t be missing for long as the action shifts to New York City and the four Ninja Turtles are engaged in another battle with their long-time foes the Foot Clan. Yet one of the nameless members of the clan has more skill than his brethren, so much skill that he was able to school the Sai wielding TNMT bad boy Raphael. This member of the Foot is revealed to be Tommy Oliver and his presence with the Foot is going to be the impious to why the Power Rangers and Turtles are going to collide with one another. With Tommy in New York and a second run in with the Turtles drags his fellow Rangers into the conflict and like all classic crossovers the teams battle rather than take the time to see if they are on the same side. With the a reveal of a classic bad guy the issue ends with the two teams at each other throat but the possibility that they will soon figure out that they are actually on the same side.

I had a lot of fun reading PR/TMNT #1. While I have read a lot of the Boom Power Rangers books as of late I haven’t read a TMNT book since the original Mirage days when they were incredibly hard to find but very much worth the effort when you did. Yet I did watch the show in the ‘90s and an updated cartoon version with my son recently so I felt completely comfortable with the book. Honestly if you have any knowledge of either franchise you will be fine as this book is completely accessible. Ryan Parrott has been writing the adventures of the Power Rangers for the past few years and has a great grasp of these original Power Rangers as they are the principal stars of his Go Go Power Rangers title. Yet Parrott seems to have a handle on the TNMT as well since their banter and team dynamic seems reminiscent of the Turtles from their heyday in the ‘90s with some obvious more modern sensibilities. I really liked the artwork from Simone di Meo. His art has a lot of kinetic movement and his fight scenes are beautifully laid out and easy to follow. I found his Power Rangers to be in the vein of their current series, which is expected since di Meo has provided artwork for those titles. While the Turtles weren’t the Turtles I remembered from their early days they did have the recent Nickelodeon cartoon look to them as I am sure that was what they were going for. All in all, it’s a beautiful book and I personally can’t wait for issue #2.

Verdict: Buy! Mighty Morphin Power Rangers/Teenage Mutant Ninja Turtles #1 is a fun nostalgic trip down memory lane. I enjoyed the great story and wonderful artwork imensly and cannot wait for the next issue.