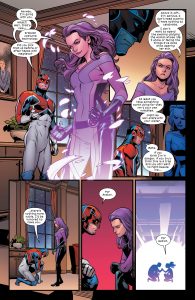 When the line-up of Excalibur was announced I was curious as to how all these characters would work together; especially with Apocalypse serving what seems to be a trend of a villain teaming up with heroes.  The execution is not flawless, but the family at the heart of the comic makes it endearing enough to check it out another issue.

We go to the otherworld- Camelot. Morgan Le Fay has become Queen in Arthur’s absence and there is some Krakoan plants polluting Camelot. Here we cut to Captain Britain is bidding farewell to his sister Betsy who is departing to Krakoa. Some family mishaps and awkward moments lead to adventures into the Otherworld and the story goes from there. There are British sorceress or high priestess, revivals and Apocalypse being very picky about his new name.

The story is intriguing with some touching moments; but there are parts where the dialogue feels stilted and leave you scratching you head as to why these characters are involved.  However, this could be resolved with future issues, especially as the second one comes out later this month. To’s art and Arciniega’s colours are good, solid marvel house style  that allow the characters to pop, and at times it looks great with several splashes, but it never tips over into exceptional.

Verdict: Trade Wait. This first issue does it job of introducing the characters and stakes with some good art but with so much good X-men books out now it does not do much to make it a must buy month to month.