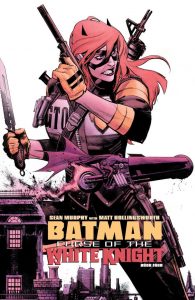 All hell is breaking loose in Batman: Curse of the White Knight #4. We’ve reached the halfway point for Sean Gordon Murphy’s second volume of his White Knight elseworlds tale and just like its predecessor Batman: Curse of the White Knight is a balls to the wall thrill ride that pulls no punches and absolutely no one is safe. Jim Gordon lies dead at the hands of Azrael, who in this universe a still the knight for the order of St. Dumas but also a veteran of special operations who is as brilliant tactician as the Batman. Batgirl and the rest of the GTO (Gotham Terrorism Oppression unit) want revenge while Batman is not only dealing with the loss of his oldest friend but also with the birth of Harely Quinn’s twins, continuing corruption of the Batman Disaster Fund, the destruction of Wayne Manor as well as the Bat Cave and whether or not he should reveal his true identity to the world. To say there is a lot going on in the build up to Batman: Curse of the White Knight #4 is an understatement.

Jack Napier is gone. The altruistic non-jokerized White Knight who tried to bring Gotham into the light is seemingly lost forever into the pale skinned madness of the Joker. Even worse the Joker knows a secret, the darkest secret of Gotham’s history going back to Gotham Valley when Edwin Wayne and Bakkar, a Priest of the Order of St. Dumas waged a war against Laffayette (Laffy) Arkham, Gotham’s first villainous Joker. What this secret is we don’t know, yet we will find out as Murphy is telling this historic tale right alongside his modern noir take on the Batman. What we do know is that the Joker and his knowledge are throwing Gotham into a chaos that is engulfing the city, destroying families, and driving the Batman and his allies to their limits to stop the revelations from toppling all the good that they have done. Yet Batman: the Curse of the White Knight #4 is a game changing issue of this fantastic series as Batgirl is finished with listening to authority and along with Detective Bullock decide that they are going to take the law into their own hands for some retribution on Azrael and his paramilitary cohorts for their assassination of her father. Batman and the GTO stand in the way of Barbara and the line she should not cross, but in this series, nothing is straightforward and absolutely no one is safe if the final page of this book is any indication.

Sean Gordon Murphy was born to draw Batman and apparently has a gift for writing the dark and gloomy world of Gotham as Batman: Curse of the White Knight has been an excellent follow up to Batman: White Knight. His Batman is perfect for an aged vigilante, a wonderful combination of the aged Dark Knight from the Dark Knight Returns with a costume that pays homage to the classic and first Elseworlds imprinted tale, Gotham by Gaslight. Murphy’s layouts are impressive and he is one of the few artists in the industry whose cars actually look like they could drive off the comic page and with his use of classic bat mobiles makes for a very enjoyable read. Murphy’s Gotham is also incredibly accessible. Any casual fan of Batman will feel right at home in this book that feels like an adult version of the great ‘90s cartoon, Batman: the Animated Series. With the second half of this mini-series and a third in the future I can’t wait to see what Murphy pulls out for the rest of his White Knight universe, but I don’t want to get to far ahead since there are still four issues to go with Batman: Curse of the White Knight.