Powers of X. The series, and its sister series, House of X, defy all expectations by constantly revealing new twists. The twists evolve naturally, every plot point planned well in advance. Powers of X continues to tell the mutant story through eras.

The story opens in Year One. Xavier continues to build his coalition. He approaches Forge, persuading him to build a more complex Cerebro. The new Cerebro, using cutting edge alien and mutant technology, downloads every consciousness of every mutant, saving them like a file. An infographic gives a more detailed schematic of the functionality of the new Cerebro. It also ominously discloses the more suspicious activities of the mutant leader. More and more, it seems something nefarious may be afoot.

Jump nine years to Year Ten, and the dogmatic duo of Xavier and Magneto visit Emma Frost. They lay out the whole plan, for both the Krakoan government and the leverage of magic drugs over developed countries. Emma calls them crazy, but she changes her mind, when she sees Krakoa. She negotiates a hefty deal for her Hellfire Club, ensuring their influence for half a century, along with influence in the budding mutant nation. A whose who of mutant villains receive messages from Xavier inviting them. We have seen who says yes, but this time, we see who said no, setting up for potential conflict down the road. 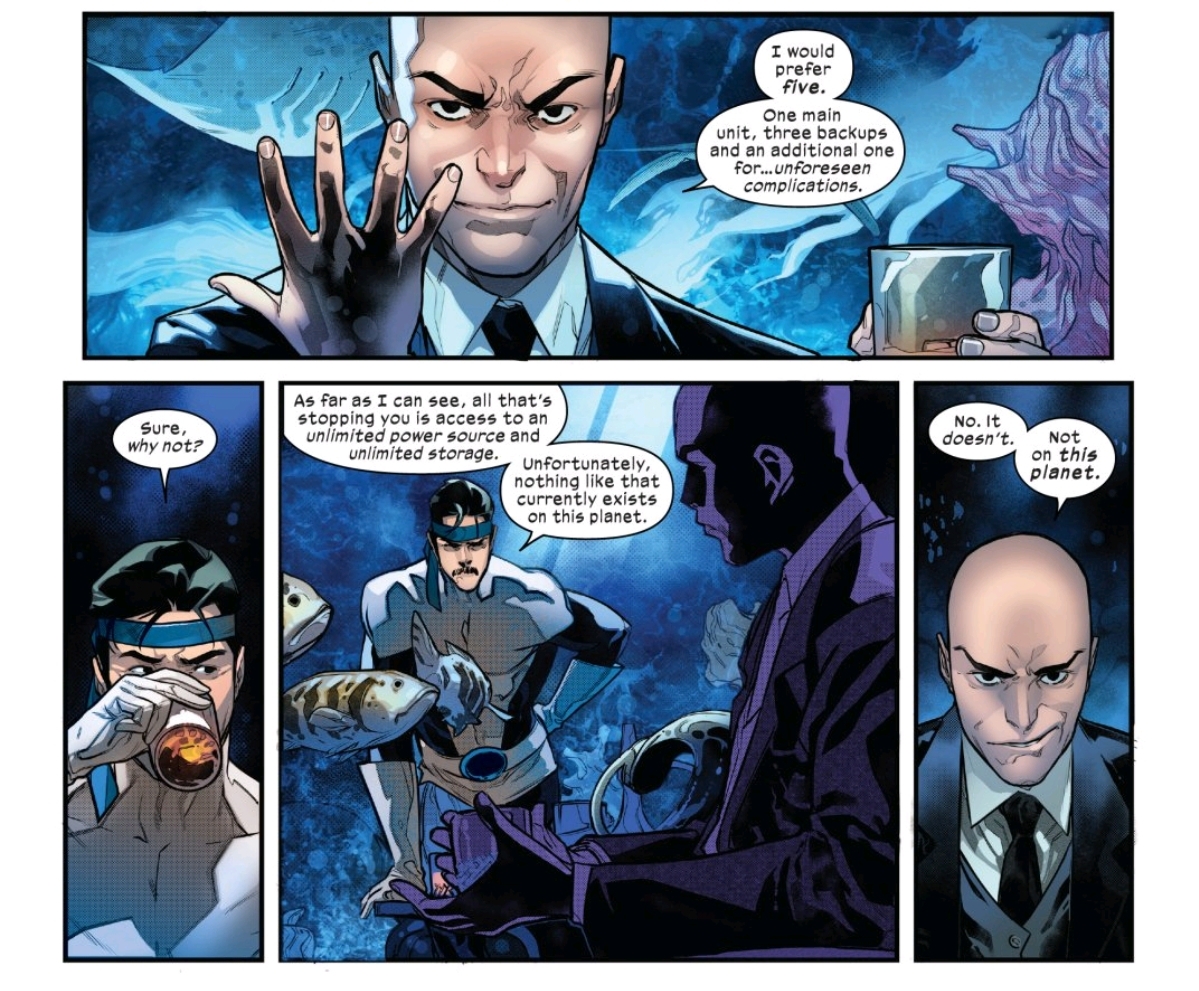 The issue skips over Year One Hundred, a time period once crystal clear that now is an open questions. The comic instead jumps to Year One Thousand. The Phalanx answer the offer of Earth’s residents. Whether the answer helps or hinders the last citizens of Earth remains unseen. Hickman showed us what happens, but anyone who has read Hickman knows there may be more beneath the surface.

Powers of X #5 eschews action, instead explaining the mutant nation, Krakoa, and how it functions. The book remains fascinating without any real surprises by building a world full of depth and answering questions plaguing us since the first issue of House of X. Hickman writes a story that forces the brain to use every white board available. While his Avengers rewrote the Marvel multiverse, Hickman’s X-Men run goes even farther in world building in the form of nation building. Before he played with the existing sandbox, but now, he renovates the sandbox into a whole beach full of hidden treasures.

The art by Silva remains top notch. A perk of the art I realize after reading some of the other comics on the shelves is the women seem more realistic and Silva draws these powerful women with respect, instead of lust. The deep colors lure the readers into a majestic and beautiful world. I love how the issue looks.

Verdict: Buy! The Powers of X creative team once again delivers another home run. You coudn’t hope for a better comic.