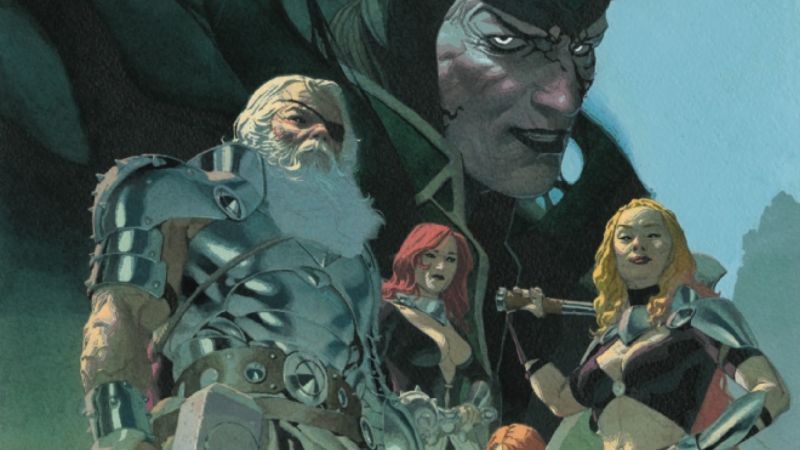 Seven years ago, greatness came to the pages of Thor. Jason Aaron and Esad Ribic began what can only be labeled as a modern epic run for the God of Thunder. For seven years Jason Aaron has guided Thor through incredible highs and immense unworthy woes as well as a war that encompassed all ten realms of the Marvel universe. Yet like all good things Jason Aaron’s time on Thor must end and for his final tale Ribic will return to wrap up the story they began years ago with the four part tale King Thor, and after last week’s first issue I feel safe in saying that this mini-series will be the fitting end to what will be remembered as a historic run if not one of the greatest Thor runs of all time.

Jason Aaron and Esad Ribic began their Thor run with the story of Gorr, the God Butcher. Gorr was an alien who came to despise the God’s of theMarvel universe and was able to become their butcher when he took possession of the necro-sword of Knull, the god creator of the Symbiotes. This hatred of the gods brought Gorr into conflict with Thor and it took three Thor’s (a young Thor, present day Thor, & King Thor from the far future) to defeat Gorr. Yet the Necro-Sword and its dark powers have once again emerged, this time a billion years in the future, and now in the hands of the God of Mischief himself, Loki. To say Loki once again has issues with his brother is an understatement as the two Norse Gods battle throws them across the universe and threatened the very existence of the new life on Midgard that King Thor and his granddaughters, the Goddesses of the Thunder, have worked so hard to cultivate over the course of Aaron’s run. While Thor and Loki wage their epic battle the Goddesses of Thunder have traveled to Omnipotence City, the city of the gods that was carved from the clay of creation in search of information but instead find the city in decay and it’s one remaining resident is the current librarian Shadrak, who is a very interesting god, and his godhood will become important as Loki’s dark essence decides to bring Omnipotence City to the ground. King Thor #1 sets up what will no doubt be an amazing story, and if the last page is an indication, it will be an epic conclusion to this era of Thor.

King Thor #1 is a worthy issue to begin the culmination of Jason Aaron’s run on Thor. Yet this is not a great entry point or even a jumping on point for Aaron’s run on the God of Thunder. That being said it is completely satisfying to readers who have been with the story from the beginning and witnessed all of Aaron’s iterations of Thor. It’s also fitting that Esad Ribic returns for this final story since it was these two incredible creators that breathed new life into Thor seven years ago and it’s fantastic that the story is coming full circle with Gorr and the Necro-Sword since that was the storyline that began this all. I’ll be sorry to see Jason Aaron leave but I’m glad that we will be getting one final fantastic story and King Thor appears to be that story.

Verdict: King Thor #1 is an incredible first issue for Jason Aaron’s final Thor story. With Esad Ribic back on art and the entire Aaron saga coming full circle this issue is a Buy!