The Legion of Super-Heroes is a storied franchise that unfortunately has an incredibly convoluted history, especially since the 1985 DC Universe realigning event Crisis on Infinite Earths. Not that there haven’t been good stories since then but since that time the franchise has been through a cycle of constant reboots with different creators trying to recapture the zeitgeist the book had at its zenith in the ‘70s and ‘80s under Paul Levitz and then Keith Giffen, which the Legion as I remember it. In recent years Mark Waid attempted a reboot in 2004 that was entertaining but eventually fell flat after Waid left and legendary Legion writer Jim Shooter tried to re-find the magic he had with the book, which he began writing as a 14-year-old in 1966 but his new take didn’t catch on with fans. Geoff Johns attempted a resurrection of the concept in the wake of Infinite Crisis that had fans excited for a time but that excitement was extinguished when the New 52 happened. The New 52 was not kind to the Legion of Superheroes and the team has not been seen in DC Rebirth until now as the Brian Michael Bendis era of the Legion of Superheroes begins in Legion of Super-Heroes: Millennium #1. 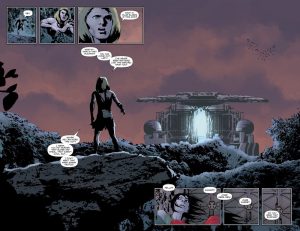 Kamandi Has Never Looked So Good

Anyone looking for a Legion of Superheroes story should check out Superman #14 as they won’t find it in LoSH: Millennium #1. Instead they will find a trip through the multiple alternate futures of the DC universe as we reach 3019 and the eventual formation of the Legion. Bendis has a habit of taking obscure characters and turning them into the focal point of his stories and he does that here with the Rose Thorn or Rose/Thorn as they are actually two personalities of the same person. Rose is a mild-mannered recluse who doesn’t like to cause problems while Thorn is a super strong vigilante who likes to spend her nights beating criminals into pulp. Bendis has used her already in Action Comics but in LoSH: Millennium #1 we find out that a side effect of her powers is apparently immortality and Bendis uses her POV for a trip forward and backward in time. Bendis begins Rose’s story in the future, the 31st Century where Supergirl is still around. Rose has come to here since the medication she uses to suppress Thorn is no longer in production since but 3019 mental health issues have been cured, or so they believe. Kara is shocked that Rose is still alive and this leads to the road down memory lane to their past but DC’s future. The story then jumps to Gotham, a Gotham of the near future where Batman Beyond prowls the mean streets in an effort to provide justice. Thorn wants to know why Batman still fights, what the purpose of it is, since she cannot see the logic in going out every night to protect the innocent. The story then jumps to the distant future, the future created by Jack Kirby in the world of Kamandi. In this future after the event known as the great disaster the heroes of the past are both legendary yet mysterious and, in this case, the focal point is Superman’s iconic suit. Thorn is interested in the suit and wants to know if there are powers from wearing it. Kamandi is of course shocked to see another human, as he is used to living amongst evolved animals, devolved human beings, or mutant human beings like his ally Ben Boxer. The final story brings us full circle as Rose tries to find employment in the Legion future but has a whole list of problems due to her history and desire to remain off the grid for so many years. These four distinct stories are each entertaining but also manages to begin putting together a jigsaw timeline where all of DC’s possible futures are intertwined into a definitive narrative that makes chronological sense, which is an interesting endeavor in its own right. 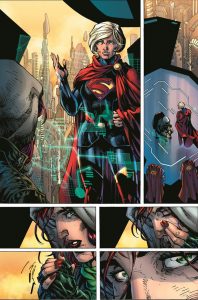 The Future Looks Bright With the Return of the Legion

I love that another A list effort is being put into the Legion of Super-Heroes. It has long been a fan favorite franchise and it deserves some love from a quality writer like Brian Michael Bendis. I also find it admirable that Bendis and company are trying to arrange their potential futures into one cohesive timeline. It’s a noble goal and encompasses a lot of great stories, especially the ‘70s era of Kirby at DC where he played around with the future in quite a few stories. LoSH: Millennium #1 is also an incredible artistic experience with each artist trying to outdo each other. Jim Lee’s powerful pencils kick off the issue and even though he’s been in the industry for over thirty years now his art is still amazing. His futuristic take on Supergirl was a delight and a great way to kick off this story. Dustin Nguyen’s return to Gotham was amazing. Although he left DC behind a few year ago for the creator owned Descender and its sequel Ascender his work here on Batman Beyond was a return to greatness and leaves me hopeful for more. Andrea Sorrentino’s take on Kamandi was an amazing interpretation of the classic Kirby character. Sorrentino isn’t trying to be Kirby, he does his own take on the Kirby creation but is true to his own styles and sensibilities. Rounding out the artists on this issue was Andre Lima Araujo, whose art I’m not terribly familiar with but was nice complement to the other artists in this issue. His take on the Legion’s future was fun, full of energy and detailed with its futuristic technology. LoSH: Millennium #1 is a great combination of story and art all while being and incredible first entry into the new era of the Legion of Super-Heroes.

Verdict: Legion of Super-Heroes: Millennium #1 is a wonderful kick off to the return of the storied franchise. While the Legion itself isn’t in the story the intertwined futures of the DC universe is a site to behold and in my opinion this issue is a Buy!