Once and Future #1 Review 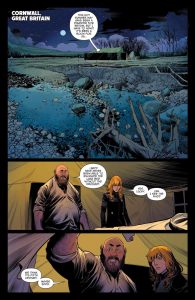 Being British it is almost compulsory that you talk about the weather, especially when this past week has been for at least British standards pretty hot. So, Gillen’s opening of this comic with two characters talking about the heatwave in Britain feels at once quintessentially British and a conversation I had every day for the past week. Once and Future is a fantasy-Esque story intertwined with British mythos written by Kieran Gillen- sign me up if it is anywhere near as good as his other fantasy titles.

The story opens with some ominous guys robbing and killing an archaeologist who unearthed a fifth-century scabbard to bring ‘England back’. After this opening vignette, we cut to the elderly but very spry Bridgette who after hearing of the earlier shown events wanders out into the woods. Which forces her Grandson Duncan to cut short his awkward date to join her; there is more to the issue, but it really should be read. Gillen does a great job of infusing British lore and general fantasy into the modern era and gives the characters instant relatability and warmth that makes this comic stand out and a delight to read.

Mora brings great detail and emotion to the scenes and characters, the cartooning and the slightly over the top style fits Duncan perfectly and his shock at the events which occur; but equally serves the more serious moments the needed gravitas.  This paired with Bonvillian’s as always stellar colours creates a really fun and gorgeous comic.

This first issue like most is mainly set up but it has the magic touches that a first issue needs to make it not feel lethargic or an info dump, instead of a joy making you want more issues straight away.