Sometimes with a great mini-series it’s hard to stick the landing. Whether it’s trying to cram in too much story so the ending feels rushed or the story feels incomplete and therefore unsatisfying. Luckily the Batman Who Laughs #7 does not fall into this phenomenon as it is a completely fulfilling ending to what has been an incredibly thrilling mini-series. From the creepy and horror themed writing of Scott Snyder, to the gritty pencils as well as the dark and layered colors from David Baron. The Batman Who Laughs is a true collection of top-level talent at their absolute best.

Over the course of seven issues the Batman Who Laughs (a Dark Multiverse version of Batman who has been exposed to the Joker serum) and his partner the Grim Knight (a Dark Multiverse version of Batman who has embraced the Gun and Killing) have been torturing Batman, Jim Gordon, and the citizens of Gotham. The Batman Who Laughs and the Grim Knight’s plan is twofold- torture Batman by bringing Dark Multiverse versions of Bruce Wayne to Earth Prime and killing them to push Batman to the brink of insanity while also working to pollute Gotham’s water supply with the Joker Toxin and turning the entire city mad. To make the situation even more dire early on in the series the Batman Who Laughs injected the Joker serum into Batman, who he feels is the weakest Batman of them all and is out to prove it. Over the course of seven issues the readers have witnessed Batman consumed by madness as he teeters toward becoming the next Batman Who Laughs. This transformation has been perfectly visualized by David Barons who has been shifting Batman’s dialogue from white lettering to red. While the Batman Who Laughs has been focused on the destruction of Batman it has fallen to the Grim Knight to destroy Gotham. Standing in his way are Jim Gordan and his ‘reformed’ serial killer son James, both of whom have donned Bat-suits in a loving nod toward Batman Beyond. Both of these stories charge to a dark and gritty conclusion with the Batman Who Laughs #7 that is full of fear, despair, hope, and redemption. 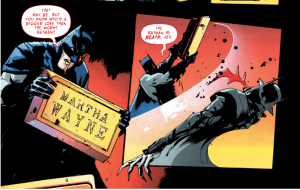 Scott Snyder’s roots in horror are on full display in the Batman Who Laughs as this book has been dark and scary. Jock was the perfect artist to accompany Snyder on this title as his work has been equally dark filled with violence and macabre imagery.  David Baron must also be given accolades as his colors a full of darkness and shadows yet layered with rich reds that draw the reader to the creepiness and violence on each page. From story to art the Batman Who Laughs #7 was a completely satisfying conclusion to a very gripping and horrific mini-series.

Verdict: the Batman Who Laughs #7 is an incredible conclusion to what has been a fantastic mini-series. With an A+ creative team it is an absolute Buy!