First of all, the pronunciation of the title: Powers of Ten, not Powers of X. Yes, Hickman loves Roman Numerals and word play, but the book frames itself in powers of ten. Four eras of X-history, Years One, Ten, One Hundred, and One Thousand. Through this look from the past to the future, Hickman shows a world shaped by the X-Men, for better or worse.

Year One: The Dream shows what Hickman states is the most important moment in X-Men history. Charles Xavier walks through a fair. He sits on a bench, smiling to himself. Dr. Moira McTaggert, expert geneticist, sits with him. Moira foretells the future we will see in this comic.  Charles asks who Moira is. Moira merely asks him to look into her mind. What he sees changes the man, though what it is, only Hickman knows. Hickman probably plans to hold onto this secret until Powers of X #6 or beyond. The final piece of the puzzle remaining the biggest piece.

Year Ten: The World takes place immediately following the events of House of X #1. Mystique delivers a USB full of data stolen from the humans. She informs them Sabretooth was captured, and Magneto shows as much emotion as anyone does for the hairy murderer. None. Mystique tries to barter, but Xavier takes what he wants. 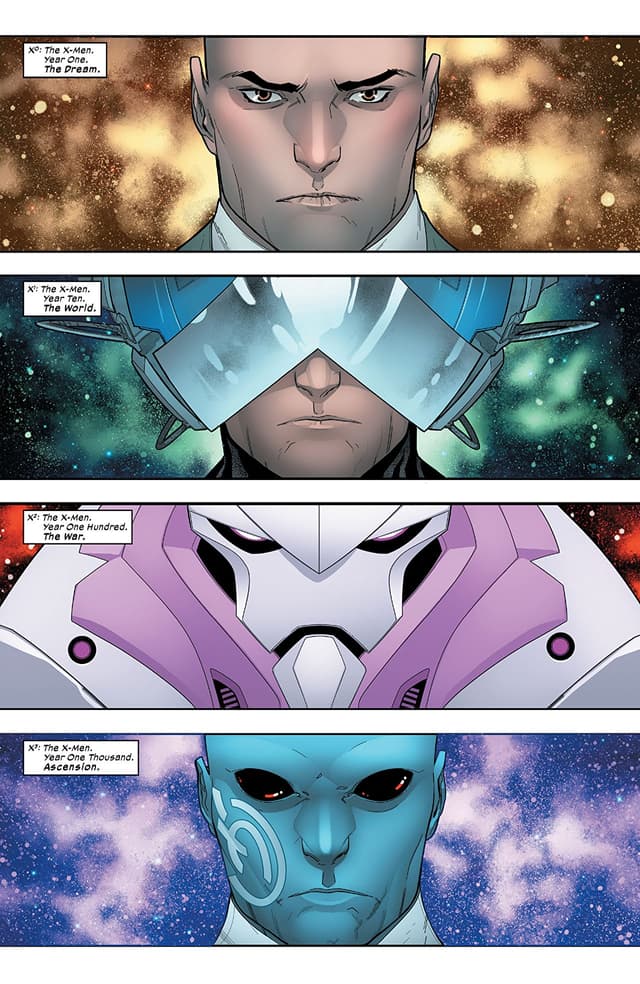 Year One Hundred: The War reminds the reader of Days of Future Past. The machines rose up as Artificial Super Intelligence overtakes humanity. The Sentinels roam like Terminators, hunting mutants. The story breaks with exposition and infographics. Mister Sinister breeds mutant soldiers to fight the machines. While they start out with one X-Gene, Sinister  creates Chimeras of X-Men in the second generation. They sport two X-Genes. The third generation exhibit 5 mutations, making each a whole X-men team in one mutant. Most chimeras are successes, but some develop more pacifist powers and attitudes. The third generation’s outliers call themselves Cardinal and resemble red Night Crawlers in appearance and personality. The fourth generation suffer from a “defect” and 40% of mutants die by their hands.

This section of the comic spans the most pages, and a lot happens here. You learn what mutants survive 90 years from House of X. You learn the fates of the mutants. Most importantly, you learn of the machines, in particular Nimrod. So far, their motives remain unclear for capturing mutants.

Finally, Year One Thousand: Ascension. The events of Year One Hundred remain visible all over, but the sentient beings evolved passed the war. We see a few remaining creatures and machines, but they remain mysterious for now.

Hickman delivers another cosmic story. You can see the walls of whiteboards that man must have as he develops this universe. I say universe because the sheer scope of it deserves no smaller world. Hickman also shunts much of continuity. He acknowledges the work prior, but he makes no attempt to build on it. This is pure Hickman. The issue takes a couple of reads to fully read and absorb. Don’t trust anyone to be what you think they are.

The art stays at event level. Special focus on specific characters and panels draws the eye and causes it to linger. Downside: some panels seem quickly drawn and lack detail, particularly around the face. Overall though, the art pleases. Furthermore, the colors by Gracia take interesting directions that lead to beautiful pages that lead to gorgeous posters.

Verdict: Buy! This team, helmed by Hickman, create a story sure to live on for decades. Maybe even a power of ten more.