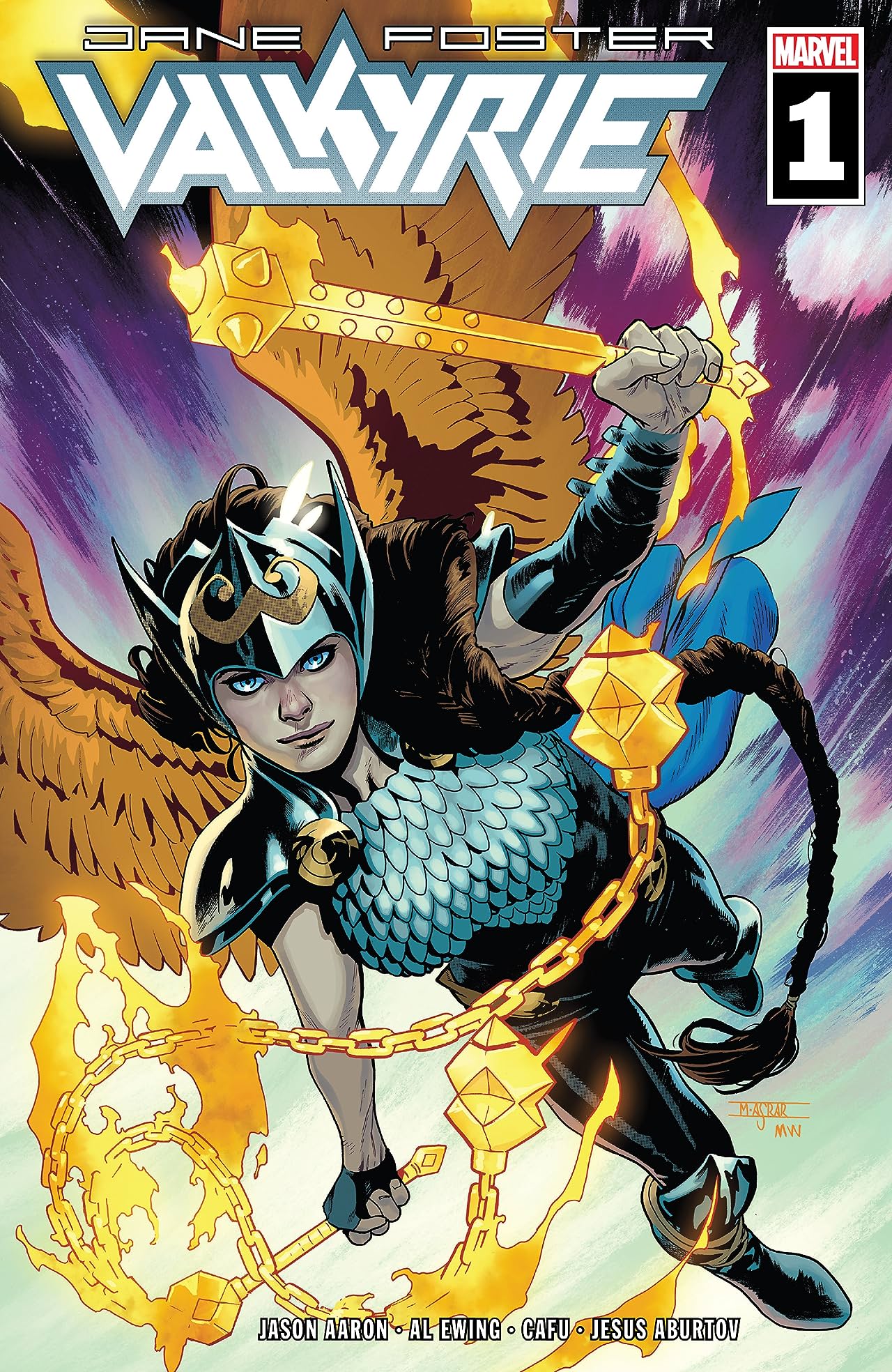 Dr. Jane Foster lived and died a hero. Her time in Valhalla ended quickly though. Now, after battling Mangog and cancer, Jane lives an ordinary life. The problem is, Jane was a hero, and she can’t stand normal anymore. She needed to be more, and she now gains more than a role: a responsibility.

During the War of the Realms, all living Valkyries perished in battle. With no Valkyrie left, no one in Asgard reached Valhalla anymore, not even Valkyrie. All at once, the afterlife was robbed from the Asgardian heroes.

In War of the Realms Omega, the spirits of the Valkyrie visit Jane. They task her with serving as the new Valkyrie, and Jane graciously accepts. Now, Jane has the power of the Valkyrie, though Jane still learns of new powers.

The material used to create the Ultimate Universe’s Hammer, wielded by War Thor and then Jane, broke down. Instead of crumbling into pieces, the hammer formed into Undrjarn, the all weapon. The weapon changes shapes as Valkyrie needs, resting as bracelets between battles. The versatile weapon gives Jane more than enough power to fight at Asgardian level.

The issue centers on Jane’s new life as a Valkyrie. She loves the power and respects the responsibility. After the WotR, the weapons of the 10 realms flooded the criminal underground. One weapon in particular, Brunhilde’s Dragonfang worries Jane. Not only because it served the previous Valkyrie, but the weapon wields incredible power and control of a flying horse. (Who doesn’t want a Pegasus?) 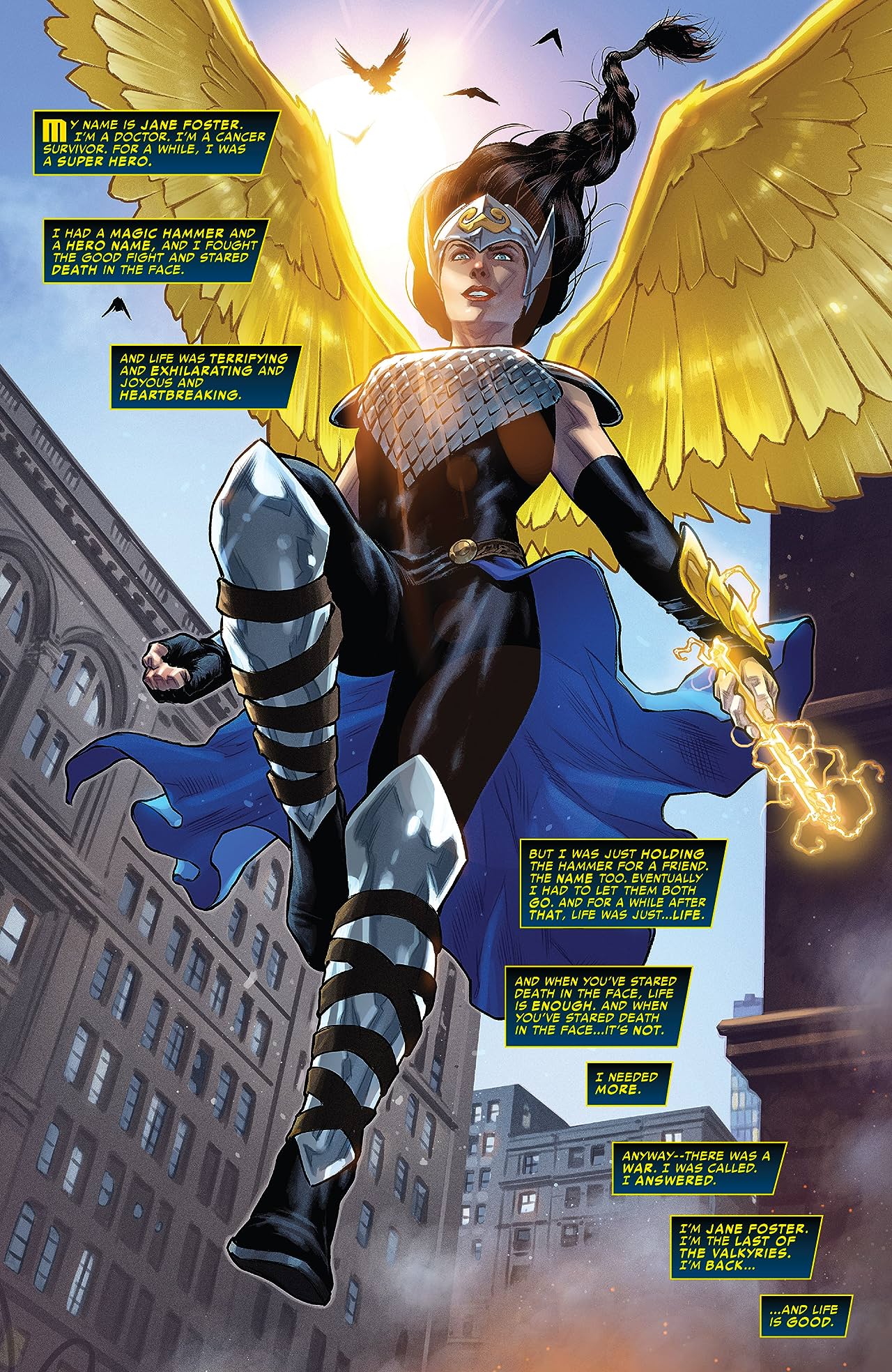 While Damage Control transports the weapon, the Fast Five pull a mobile heist of their convoy and make off with the weapon. If the Fast Five evades your Marvel Memory, they are a group of five rollerbladers with superpowers who pull off mobile heists. Because they move quickly and in different directions, they embarrass quite a few superheroes by escaping. Valkyrie loves the chance to crack her knuckles on some criminals. Unfortunately, another villain eyes DragonFang. Someone much deadlier.

Al Ewing  and Jason Aaron bring all their amazing energy to the comic. Humor, emotion, and badassery fill the comic in equal parts. Aaron and Ewing write Jane perfectly, elevating her from a supporting character to the main attraction. Jane radiates intelligence and power. The writers manage to show her flaws, how her driven attitude shorts the rest of her life, without making Jane seem weak.

The art is worthy of the main Thor title. Every panel drawn beautifully, every face emoting clearly. You remove the dialogue, and you understand the conversation by the faces. The complicated feelings rendered by Cafu speak volumes.

Verdict: Buy! Now. This comic continues Jason Aaron’s magnum opus of Jane Foster, not just featuring the character, but adding to them. Valkyrie: Jane Foster delivers everything you need in a superhero comic. The writing and art sync to create a masterpiece readers will talk about for years.