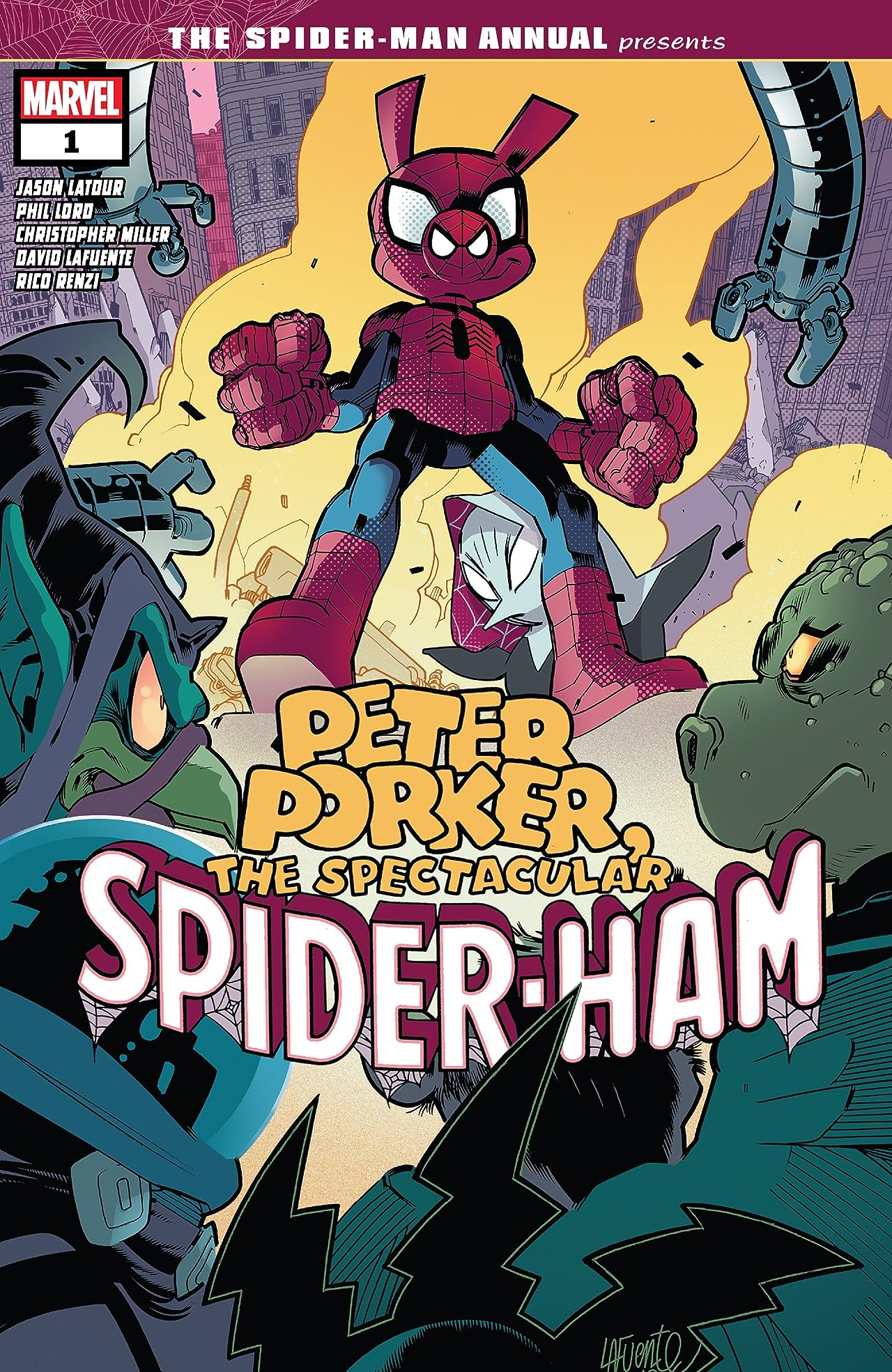 The first appearance of Spider-Ham dates to November 1983. Marvel released the crazy one shot, Marvel Tails Starring Peter Porker the Spectacular Spider-Ham #1. In this issue, writer Tom Defalco introduced readers to Earth-8311. (The year and month of the issue) This Earth sports anthropomorphized animal equivalents of our beloved heroes, including Captain Americat and Hulk Bunny. The issue harnessed Howard the Duck’s energy and combined it with the Looney Tunes’. The dialogue and names contained more puns than a dad joke book. The issue proved popular, and Peter Porker got a bi-monthly series.

The character’s origins are actually kind of grim. As opposed to a person bitten by a radioactive spider, they are a spider bitten by a radioactive pig. Peter, he took the legal last name Porker later, lived in May Parker’s basement. May worked as an inventor, striving to create the first atomic hair dryer. The experiment went wrong, irradiating May. The radioactive May bit Peter. Peter underwent a drastic transformation, turning into a pig, while still maintaining the powers and skills of a spider. The series didn’t last long into the 80s, and the character mostly fell to the wayside. The Dan Slott penned event, Spider-verse, brought the character back in a big way. The ham hero returned in Secret Wars, fighting along the other Spider Totems against Norman Osborn. The latest foray into the comic events was the Spider-Verse sequel, Spider-Geddon, where the Spider-Totems reunited to defeat the villainous Inheritors again. (Inheritors basically act as vampires who only target Spider Totems.) For the most part, Spider-Ham only appears in Spider-related books, and they barely address his home Earth.

This issue starts with a Spider-Verse story, written by Jason Latour, where the porcine swine shows up to assist Miles Morales and Ghost-Spider (Spider-Gwen). The duo fight the Circus of Crime. The Ringmaster hypnotizes the heroes, but Spider-Ham appears. Spider-Ham defies the villain’s bewitching hat and socks the buffoon. The problem is, in the portal that brought Spider-Ham, now brings his villains, including arch-nemesis Ducktor Doom! While the hero is distracted by the parade of villains, the Ringmaster grabs onto one of the heroes’ dimensional wrist bands, and he transports himself to dimensions unknown. After that, we follow Spider-Ham in a world without his villains. He questions his existential meaning for existence in this new world. He runs into Spider-Guin, and they team up. Spider-Ham learns other Spider-Totems live balanced lives. He wonders whats wrong with him.

The second story takes place during in an unspecified war in the Marvel universe, the silly versus the serious. Spider-Ham gets tired of the battle, and he disappears for a drink in a bar and runs into Howard the Duck and Chewatu, the Watch-Dog. They wax poetic about their role in the universe in a philosophical look at the importance or lack thereof of parody characters.

This issue crams a lot in it to try to make it worth the $4.99 price tag. The first story crams in so many puns you don’t notice half of them. Maybe its over-sauration, but the jokes land flat. I smiled most of the issue, but I didn’t laugh. While I learned a lot about the character, the issue didn’t make me care about him. The emotional beats just felt whiny.

Verdict: Pass. I came to the issue excited, but I left disappointed. If this was a series, I wouldn’t check in for issue two. Latour tried hard, there is no doubt, but the issue didn’t succeed on any fronts.