With a world ending galactic storm and a legion of Thor’s the War of the Realms finally comes to an end in the War of the Realms #6. For six glorious issues Jason Aaron and Russell Dauterman have blown readers away with a compelling event that has consumed the entire Marvel Universe and many a comic reader. The War of the Realms has been waging for years by this point, beginning all the way back in Thor: the Good of Thunder #13 (2013) where Malekith made his malicious return to the pages of Thor and began his war that would eventually encompass all ten realms of the World Tree. Earth (AKA Midgard) was the last realm to fall to Malekith and his forces, and it has been the most difficult to conquer as Earth’s mightiest heroes, a remaining gods of Asgard, and the remnants of the other nine realms have put up a furious defense and in recent issues launched one hell of a counter attack which brings us to this unbelievable final issue. 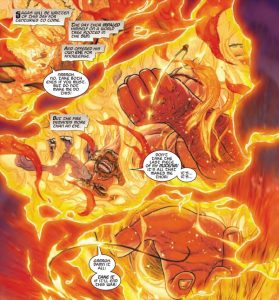 Over the past two issues the Avengers and their allies have been launching counter attacks against Malekith’s forces and freeing the different continents of earth. Still standing in the way of freeing earth are King Laufey of the Frost Giants who are entrenched in New York City and Malekith himself who has gained possession Knull, the symbiote blade that is Venom. Malekith has decided on Stonehenge as his seat of power and there he holds Odin and Frigga, vowing to kill Thor’s parents if the Thunder God does not appear to face him in combat. While the Avengers deal with Laufey it falls to Thor to wage a final battle against Malekith, but he won’t be going alone.  Thor is joined by every Thor Jason Aaron has ever written since he took over the title in 2012. Modern Thor is joined by his younger self, a Thor who is headstrong and has yet to lift the Hammer Mjolnir. Also arriving for the final battle is the All-Father Thor from a billion years in the future and a wonderful appearance of Jane Foster Thor as she has lifted the War Thor Hammer jettisoned from the Ultimate Universe in the wake of Secret Wars to become Thor for one last stand. Seeing these four Thor’s together brought a smile to my face and is a fitting legion of Thunder Gods for this epic finale. While the Thor’s battle Makekith it falls to Daredevil the All-Seeing, the Lady Sif, and the Avengers to rid New York City of the Frost Giants before Laufey can release the Cask of Winter which will encompass the earth in Ice. While both battles are waged a galactic storm is spawned from the rebirthed World Tree in the heart of the sun, and this storm will either be harnessed or the death of all things. With epic scenes and escalating tension, the War of Realms comes to a beautiful and fitting end in the War of Realms #6. 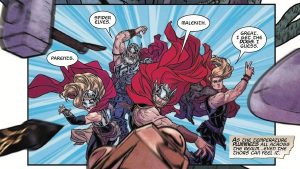 It will take more then one Thor to end this War!

Jason Aaron and Russell Dauterman’s the War of Realms was an epic fitting the moniker of an Event. It’s perfectly plotted, beautifully written, with incredible art. Aaron and Dauterman saved their best for last as the War of the Realms #6 was an incredibly satisfying conclusion to what will go down as one of my favorite Marvel Events in some time. The story pacing is brilliant as the action moves back and forth from the two main conflicts in a way that never lets the reader get bored while also making them want more. Each story is compelling and the coming of the storm only ramps up the tension and builds to a moment that fans of Thor have been waiting for for some time. Dauterman’s pages are full of action and characters but never feel cluttered and somehow convey the tension of the conflict within his art. The War of Realms #6 is a great comic book by an incredible creative team that truly know how to tell an epic comic story.

Verdict: the War of Realms #6 is a perfect conclusion to Marvel’s latest event and with great writing by Jason Aaron and breathtaking artwork from Russell Dauterman it is an absolute BUY!