The Dark Phoenix Saga may well be the greatest X-Men story ever told. That’s a bold statement considering the X-Men is one of comics longest running franchise and is littered with amazing talents and incredible stories. Yet amongst all of these tales and creators the Dark Phoenix Saga stands above them all and sets the standard that all other X-Men tales attempt to be. Fox Studios will release their final X-Men movie this weekend, and fittingly their swan song is their attempt to both capture this classic story for the silver screen and to also remedy the horrific first attempt at the Dark Phoenix Saga in the underwhelming X-men: the Last Stand. I may be in the minority but other than the Deadpool movies I’ve never been blown away by the Fox take on the X-Men and I sadly have very little faith in the movie capturing the greatness that is the Dark Phoenix Saga.

I love comics from the ‘80s. To me it is my favorite era of comics, especially Marvel comics. I love this era not just because it’s when I became a collector of comics, even though it is a factor, but it felt like the creators were having as much fun as the readers. These creators were the second and third generation comic creator who had grown up on what Lee, Kirby, Ditko, and countless others did in the Silver Age of Marvel. Now it was their turn to tell the tales and they took what they loved as children and expanded upon it. No one did this better than Chris Claremont and John Byrne. Starting with The Uncanny X-Men #108 these two titanic creators became the driving force for Marvel’s mutants. This is well before the X-Men became the most popular franchise in all of comics, in fact this run is the reason why they became so popular. This was less than two years removed from Giant Sized X-Men #1 and the relaunch of the X-Men and Claremont and Byrne were given a long leash with what they wanted the X-Men to be and they ran with it.

Claremont and Byrne’s the Uncanny X-Men run was serialized storytelling at its best. Each issue could be read as a standalone story but when read as a whole the characters grew and the drama was profound. Claremont and Byrne came into their own during the Dark Phoenix Saga and the comic reading world took notice. By the end of the Saga the Uncanny X-Men would skyrocket to the top of the sales charts and become the X-Men franchise that stormed the comic reading world during the ‘80s, ‘90s, and ‘00s. But before that would happen they had to tell a fantastic story to, a story that could stand the test of time, they had to create the Dark Phoenix Saga. What they ended up creating has stood the test of time and became so important that it was collected in 1984, years before it became common place to collect historic runs or today where every issue is collected into a graphic novel. I remember seeing the collection at a Waldenbooks (remember those?) with its stunning Bill Sienkiewicz cover. I’d never seen a comic collected and begged my parents to buy it for me. Luckily they did and I read that edition so many times the spine broke and the pages had to be taped back together. Since 1984 the Dark Phoenix Saga has never been out of print and Marvel always finds some new way to release it to make sure fans have the opportunity to pick it up and read it.

The Dark Phoenix Saga begins in the Uncanny X-Men #129 but really the seeds had been planted going back to issue #101, the first appearance of Jean Grey as the Phoenix, and over the course on twenty-eight issues Claremont had inserted comments and scenes depicting the potential power of the Phoenix as well as what would happen if it was corrupted. Then Claremont introduced Jason Wyngarde AKA Mastermind who used his illusionary powers to manipulate Jean as a way to gain entry into the inner circle of the Hellfire Club. These manipulations and plans finally kick into high gear in #129 as the X-Men return to America from Scotland. The team had been dispersed for some time due to a fight with Magneto in the Savage Land and this was the first time they had been reunited and had some down time. This was still in the early period of the ‘new’ X-Men team and Claremont was still working out their personalities, which would become more solidified during the Saga. The beautiful thing about the Dark Phoenix Saga is that it starts out small. Xavier and some of the X-Men travel to Chicago to recruit a new mutant, young phaser Kitty Pryde. It’s this recruitment that brings them into contact with the Hellfire Club as they to have their eyes set on Pryde but also on the X-Men. The Hellfire Club attacks the X-Men while Kitty entertains them at a local soda shop. The issue ends with three X-Men (Storm, Colossus, & Wolverine) imprisoned by the Hellfire Club while Kitty has snuck aboard their transport in the hopes of saving her new friends. The Uncanny X-Men #130 picks up the tale as Cyclops, Phoenix, and Nightcrawler in New York seek out a new mutant, who happens to be the music sensation Dazzler (in her first appearance). Mastermind, in his Jason Wyngarde persona, uses the concert as a chance to mess with Jean and reveal his goal of making her the Black Queen of the Hellfire Club. The Hellfire Club then makes an attempt to kidnap the three remaining X-Men but are thwarted by the power of the Phoenix and in the next issue Cyclops, Phoenix, and Nightcrawler rescue a frightened Kitty Pryde who informs them of what had occurred in Chicago. With the help of Kitty Pryde and Dazzler the X-Men rescue their captured teammates and set their sights on finding out more of what the Hellfire Club’s true goals are.

In the Uncanny X-Men #132 the team reaches out to founding member Warren Worthington III (Angel) who as a millionaire philanthropist who happens to be a member of the club.  Angel in turn gets the team invited to the Hellfire Club’s exclusive birthday party. Cyclops, Phoenix, Storm, and Colossus infiltrate the club as guests while Wolverine and Nightcrawler will enter the club from the sewer. Wyngarde uses the party as his chance to finally turn Jean to his pawn completely and the inner circle of the Hellfire Club quickly dispatches the X-Men and ends with Jean now the Black Queen, the team in shackles, and in one of the best comic moments of all time, a pissed off Wolverine rising from the sewers below in a berserker rage and looking for revenge. The Uncanny X-Men #133-#134 is the culmination of this story arc within the Dark Phoenix Saga as the team takes on the Hellfire Club. Wolverine spends most of #133 dispatching the Hellfire Club’s foot soldiers before making an all-out assault on the Club. Wolverine’s assault gives the rest of the team the opening they need to free themselves and Jean finally frees herself from Wyngarde’s spell and destroys the man’s psyche which is the catalyst for the emergence of the Dark Phoenix.

The Dark Phoenix Saga takes its dark turn with The Uncanny X-Men #135 as Jean, now the Dark Phoenix, attempts to kill her teammates and then flees to outer space where she obliterates a solar system, killing billions. Her actions draw the attention of Shi’ar Imperial Battle Cruiser. Dark Phoenix destroys the Shi’ar cruiser but not before they relay the information to the Shi’ar high command and the Majestrix Lilandra, longtime ally of the X-Men who quickly recognizes Jean. The Uncanny X-Men #136 sees the Dark Phoenix return to earth and comes into conflict with her fellow X-Men. Dark Phoenix is far to powerful for the combined efforts of the X-Men but with her shared connection to Cyclops and the tremendous efforts of Charles Xavier the team seemingly forces the Phoenix force from Jean. Yet even with the Phoenix Force removed Jean must still stand trial for her actions, and the issue ends with the team being teleported away.

The Uncanny X-Men #137 may be one of the greatest comic books ever created. It is a double sized extravaganza that sees Jean stand trial before the combined galactic empires of the Shi’ar, the Kree, and the Skrulls. In a trial by combat the X-Men take on the Imperial Guard (a collection of powerful beings from the Shi’ar empire). Set in the Blue Area of the Moon (a small area with breathable oxygen where the Inhumans once lived) the two teams fight to decide the fate of Jean. It’s one of the best fight scenes in X-Men history and the two teams fight to a stalemate until Jean reappears as the Phoenix and chooses to sacrifice herself for the sins of what the Dark Phoenix had done and for the fear that she would not be able to stop herself in the future. It’s a sad tragic ending that leaves me emotionally spent every time I read it. It’s also the benchmark that I hold X-Men events and crossovers to still to this day. I don’t know if that is fair or not but to me it is the greatest X-Men story ever told.

Sadly the impact of the Dark Phoenix Saga was neutered a few years later when Jean was revived in Fantastic Four #286 (by Byrne) and it was shown that he body was replaced when the shuttle crash that had seen the first appearance of the Phoenix. Jean had been placed in a cocoon and stayed at the bottom of Jamaica Bay until found in Avengers #263 then fully revived in the Fantastic Four. Jean and the original X-Men then went on to form X-Factor and became a vital component to the X-Men throughout the ‘90s Mutant boom only to die again during the Grant Morrison only to be revived more recently and is again amongst the living. If I had my choice I would have left Jean dead, as her sacrifice was a great character moment and just like Uncle Ben she would have had a larger impact as a deceased character then through her countless resurrections. 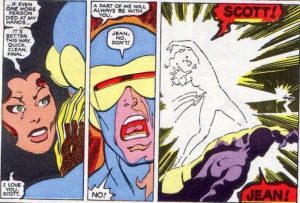