DC has an event problem. Doomsday Clock is painfully delayed, to the point that people are shocked when an issue finally reaches them. Heroes in Crisis on the other hand started out strong then devolved into a cluttered mess that did more harm than good. Tom King and Clay Mann’s event wrapped this week with Heroes in Crisis #9 what began as an intriguing idea somehow came off the rails over the last few issues and sadly it got to the point that I didn’t care who committed the murders at Sanctuary, then became infuriated when it was revealed that it was in fact Wally West…. my Flash! 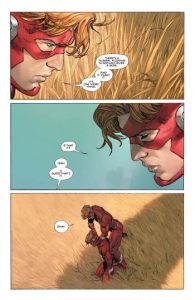 The Sad Collapse of an Iconic Hero

To be fair Heroes in Crisis #9 wasn’t all bad. It is a beautiful book. Clay Mann is on his way to becoming a superstar artist as he has an incredibly realistic style and draws some incredibly beautiful superheroes. Tomeu Morey’s colors are vivid and deep and lend themselves beautifully to Mann’s artwork. It’s the story where I have issues. I’m a big Tom King fan, I have been since I read Grayson and have been incredibly impressed with his turn on Batman. So much so I was infuriated last week when it was reported he was fired from the book at the end of this year (luckily it was revealed he would instead be finishing his epic run on a new title –Batman & Catwoman). But Heroes in Crisis disappointed me. What started as an interesting murder mystery devolved into a character assassination for no apparent reason.

Heroes in Crisis #9 wraps up the lingering questions over who committed the murders at Sanctuary all the way back in issue #1. Sadly the reasoning is a bit of a mess and really doesn’t fit with where this book started. The majority of the book is littered with the one panel monologues of DC heroes as their bear their souls to the Sanctuary cameras. For an event that started with so much promise it unfortunately ends with a whimper…. an infuriating whimper.

I should point out that Wally West is my flash. The first Flash comic I ever bought was theFlash #1(1986) in which Wally takes up the mantle for Barry Allen, who died in the monumental Crisis on Infinite Earths #8. Then Mark Waid took over the book with the Flash #62 and the Flash became one of my favorite characters and the title became my must-read book every month. Sadly the world has not been kind to Wally West over the past decade and the DC Rebirth has been down right atrocious with Heroes in Crisis #9 being the nail in the coffin of a once magnificent hero. King decimated an iconic hero. Heroes in Crisis degraded the core of who Wally was, a hero who overcame every obstacle in front of him to save the day, a hero who sacrificed everything to make sure that others didn’t suffer. King turned him into a selfish murderer simply to fulfill a story need, a story that seemed to veer from its original planned intent. I don’t know why this turn felt necessary but it was a complete insult to longtime fans of Wally West (believe me, there are a lot of us).

Verdict: The term Crisis in the DC Universe used to mean something to me. Crisis on Infinite Earthshad a profound impact on me in my formative years as a comic fan. It was this original event that created the hero Wally West would become and sadly Heroes in Crisis feels like the end of that iconic Flash. I’m sad for what Heroes in Crisis became and am glad that Heroes in Crisis #9 puts an end to this event.